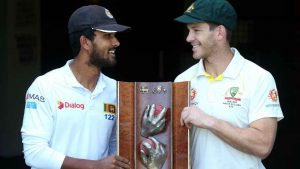 Sri Lanka are looking to feed off the performance of their subcontinental neighbours, India, who recently registered their first Test series win in Australia.

India’s 2-1 series win was the first by any Asian Test-playing nation in Australia and Sri Lanka will look to account for the second when they take on Australia in a two-match series beginning 24 January.

“In batting and bowling, and even in the fielding, the Indians showed the world every place they go to is a home [away] from home,” Rumesh Ratnayake, the Sri Lanka bowling coach said in Brisbane ahead of the first Test at The Gabba.

Two centuries in the warm-up game have earned Kurtis Patterson his maiden call-up to the Australia squad for the Sri Lanka Tests.

Australia are, of course, without Steve Smith and David Warner and have been affected further by Josh Hazlewood’s injury. A significantly weak Australian team at the fag end of a long Test season could augur well for Sri Lanka and Ratnayake said it’s a good chance for his side to aim for history.

“It is certainly one of the better chances,” he said. “A wounded Australia is a bit of a mystery in any sport really. We understand that and we know that when they are wounded they will be at their best.”

Sri Lanka paceman Nuwan Pradeep has been ruled out of the two-Test series in Australia with a hamstring injury.

Marnus Labuschagne, the Australia all-rounder, said the wicket at The Gabba will provide opportunities for both bat and ball. Labuschagne, who batted at No.3 in his last Test, against India, is keeping his options open regarding batting positions.

“I did enjoy batting at No.3, but I will be happy to bat anywhere in the order,’ he said.

A day/night Test offers different conditions to a day game, but he is confident the wicket in Brisbane will hold true to its nature of pace and bounce.

‘I’ve got to concentrate on the white ball’ – Peter Handscomb says he wants a Test return eventually, but will focus on limited-overs cricket for now.

“I am not sure what is going to happen out there but probably not as much moisture as there would be for a 10am start,” he said. “And probably a bit of grass on it. But it’s always such a good wicket because there’s such nice carry and obviously provides opportunity with the ball and bat.”

With the ball, more swing and seam is expected, especially under lights. “I bowled 18 overs in Hobart and I bowled a little bit in Shield cricket, but the actual ball itself doesn’t feel any different,” Labuschagne said of his experience with the pink ball.

“I don’t think it takes that much to get used to the differences. The only difference is the swing and the seam.”