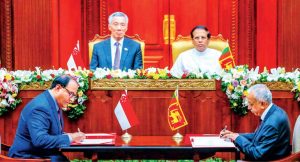 Sri Lanka is in the process of redressing one-sided free trade agreements (FTAs) with more deals set to be finalised over the next several months.

In addition to trade agreements already signed, the Government is continuing discussions with India, China, Singapore, and Thailand for several other proposed trade agreements. Apart from the Economic and Technology Co-operation Agreement (ETCA) between India and Sri Lanka, the other three agreements are FTAs.

Free trade is the practice of removing restrictions including bans, quotas, and taxes on imports and exports between countries since the introduction of the open economy concept to Sri Lanka in 1977. All successive governments have sought to sign bilateral or multilateral FTAs constituting an agreement to mutually lower these barriers. Even though the other parties to the bilateral or multilateral agreements were able to get the maximum benefits after removing restrictions, Sri Lanka’s position still remains a concerning question.

According to 2017 international trade statistics of Sri Lanka, out of the value of total exports to India that amounted to around $690 million,the value of total exports to India under the India-Sri Lanka FTA was around $ 442 million.On the contrary, out of the total imports to Sri Lanka from India valued nearly at $4, 495 million, the total value of imports from India to Sri Lanka under the FTA was around $257 million.

Commenting on the bilateral agreements with India and Pakistan, he said the products manufactured in Sri Lanka should be allowed to be sold in the local market.

“Some agreements discriminate local products against the imported products. As an example, there’s a local company making high-density boards, but now they are not allowed to sell in the local market. They are a BOI company – a $ 30 million investment that has been operational in Sri Lanka for the last 10 years. However, they have been told to export their products. Around 15% is allowed to be sold in the local market, whereas foreign-manufactured products are allowed to be imported,” he stressed.

“Now the question will arise whether these people have the benefit of duty-free machinery. You can have a certain component of duty to be imposed considering that. If you are importing some of the raw materials,i.e. chemicals, you can have a small duty component and increase the locally manufacturing product. But we don’t do that. We have to look at the matter case by case. People think that we don’t have to manufacture in Sri Lanka because they can conveniently import. Even this small market that we have is deprived of local manufacturers,” Jayasuriya further added.

According to Jayasuriya, the agreements should be amended, allowing the local manufacturers who were allowed only to export their products to sell those products in the local market.In case of any matter regarding tariffs,it should also be promptlyresolved.

Criticising the lethargic approach of the public officials when it comes to implementation of Government policies, Jayasuriya said: “If the agreement says only 20% can be sold in the local market, they implement it just as it is without assessingthe impact on the economy.”

“If there are any practical issues, such issues should be corrected by signing a separate agreement as supplementary to the existing agreement to change the provision,” he said.

Jayasuriya said that there was no issue with having a free economy.However,he said, what happened to Sri Lanka in 1977 was that the country went from one extreme to another andbegan to import all kinds of goods, including toothpaste, without any control.

“Western countries are pushing for these for their own benefits. But we should first think about the people of this country and help the local producers expand their businesses,” he said.

Highlighting the labour issue, the former BOI Chairman said that if Sri Lanka faces issues with regard to labour, the countryought to bring down foreign labourers, despite people saying that there is an insufficiency in the availability of jobs, because people of this country are not prepared to take up the jobs, he explained.

Jayasuriya also elaborated the necessity of having serious public discussions on the country’s trade policy at a time the economy struggled to survive with low levels of contribution to GDP from the production sector. He also noted that people were discussing these matters on a compartment basis and the business community should take the responsibility. He also lashed out at the authorities responsible for reviving trade policies.


Meanwhile, Central Bank of Sri Lanka (CBSL) Chairman of Monetary Policy Consultative Committee Prof. SirimalAbeyratne said: “There are several conditions for FTAs to work. One condition is that there should be natural trade flow. Without FTAs, there should be natural trade flows as with a FTA you can maximise the benefits. The second condition is addressing our internal trade policy matters. Without addressing internal policy matters – in other words,without addressing our liberalisation problems – FTAs don’t work.”
,“Even for other FTAs like those with India, though we say that India is a big market for us, we haven’t improved our investment line up. We haven’t improved our liberalisation so it has not worked for us. Before we come to FTAs and even for FTAs to work, we have some homework to do. Then, we can maximise our benefits from FTAs,” he added.

However, the Ministry of Development Strategies and International Trade stated the discussions were ongoing for the proposed FTAs with China, Singapore, Thailand, and India.

“Sri Lanka has concluded six rounds of negotiations, which are basically aimed at trading goods, services, investments, and economic cooperation. The amendments to the Singapore-Sri Lanka FTA will also be started within the next couple of months and all negotiations which are currently ongoing are positive for Sri Lanka,” the Ministry said.

Commenting on the propose FTAs, Cabinet Minister KabirHashim said: “Vast amounts of agreements had been signed with many countries from time to time. Some of them were relevant while some others were not, and now we are redressing some of the FTAs that need to be put in place and to place Sri Lanka in a position within them.”

“I believe that none of the agreements that are to be signed will be signed at a disadvantage to Sri Lanka – it will be well researched with the assistance of the relevant ministries through expansive discussions and negotiations.Finally, with the approval of Parliament, those agreements will be signed. It’s a very carefully done process and I don’t think there will be any danger,” the Minister noted.

Breaking stereotypes through the generations

February 26, 2019 bythemorninglk No Comments
Seyad, a 43-year-old fashion designer, came out to his family and friends when he was 21 years. Seyad shared his journey as a gay man who managed to stand against all odds.