October 12, 2019 by The Sunday Morning No Comments 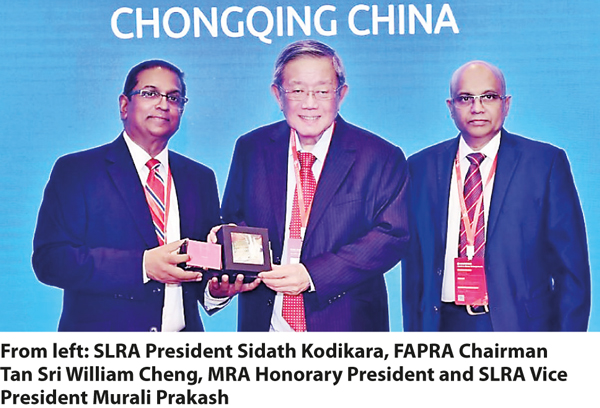 The SLRA, commenting on the induction, noted FAPRA membership is expected to give its body a plethora of benefits in reinventing retail in Sri Lanka. “Possible knowledge sharing, exchange programmes for executives, opening of windows for local retailers in other markets, possibilities of joint missions and ventures, and understanding trends and retail inventions are some of the possible actions that are being explored. In our quest to build retail excellence in Sri Lanka and to make it a retail hub for shopping, SLRA considers this alliance a great way forward both for the retail industry and country at large, asserted the two executive SLRA members who visited,” it noted.

The Sri Lankan retail industry had recorded an encouraging growth of 6.6% CAGR (compound annual growth rate) since 2013, and the scale is $ 31 billion which accounts for one-third of national GDP.

The retail industry continued its emerging contribution to the nation’s economy and recorded an employment of 1.17 million (14% of the labour market of Sri Lanka) staff with more than 300,000 retail outlets. For 2019 Q1, wholesale and retail trade indicates 4.4% growth.

FAPRA was founded in 1983 and fully established in 1989 at the fourth APRCE in Singapore. Since then, it has implemented activities and developed itself with the aim of discussing common issues in the region and promoting information exchange and friendship, thereby contributing to the development of commerce and the improvement of retailers’ status in the region.

FAPRA is the umbrella organisation of 19 retail associations in the Asia-Pacific region, i.e. Australia, China, Chinese Taipei, Fiji, Hong Kong, India, Indonesia, Japan, Korea, Kyrgyzstan, Malaysia, Mongolia, Myanmar, New Zealand, Philippines, Singapore, Thailand, Turkey, and Vietnam. It has, over the years, assisted its members to foster closer ties, promote collaboration, and exchange knowledge. The SLRA said it is honoured to be the only representation from Sri Lanka and its 20th member.

The 19th APRCE was visited by more than 4,000 delegates and participants from more than 10 countries/regions, whilst the next APRCE will be held in Indonesia in 2021. The theme of this year’s APRCE was “New Retail, New Consumption, New Dynamics – Co-operation and Sharing”.

November 15, 2018 byCharindra No Comments
Four leading industrial chambers have condemned the conduct of parliamentarians after the events of today and yesterday in the house, calling it both "shameful" and a national "embarrassment".