The Minister of Provincial Councils, Local Government and Sports Faiszer Musthapha has ratified the squad.

Thirimanne and Samarawickrama in

Thirimanne, who had had an extended poor stretch before being dropped in 2017, makes his way back into the squad via runs for Sri Lanka A. He had been the highest scorer in the A team tour to Bangladesh in July, having scored 347 runs at an average of 173.5, across four innings.

The 23-year-old Samarawickrama, meanwhile, has not been in particularly prolific form in the high-profile domestic competitions this year, but has been picked largely on potential. He had played four Tests toward the end of 2017 and made a high score of 38.

‘Chandi’ is back as skipper 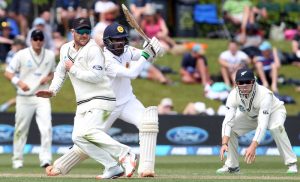 Dinesh Chandimal is back as Captain

Dinesh Chandimal, who missed the last two Tests of the recent series against England with a groin strain, is back to lead the side.

The only major omission is that of off-spinner Akila Dananjaya, who is awaiting the results of his biomechanics test, having been reported for a suspect action. Also failing to find a place in the squad is opener Kaushal Silva, who produced four modest innings in the recent series against England.

Danushka Gunathilaka, who also had a poor Test at the SSC, and has been in various disciplinary scrapes over the past 18 months, has been selected, however.

The composition of the five-member seam-bowling contingent is largely as expected. Kasun Rajitha and Lahiru Kumara, who had both impressed in the West Indies, are in the squad. Dushmantha Chameera, who had a good tour of New Zealand in 2015, has been chosen as well. Senior seamers Suranga Lakmal and Nuwan Pradeep are in the squad as well. Pradeep has not played a Test for over a year, but that has largely been down to injury concerns rather than form reasons.

Sri Lanka will leave for New Zealand on Tuesday, 4 December for two Test matches before commencing the limited-overs version of the tour.

July 19, 2019 byRevatha No Comments
ICC suspends one of its Full Members Zimbabwe for the first time