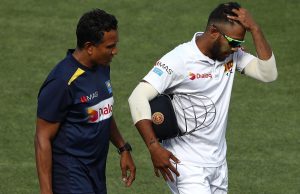 The Sri Lankan had ducked his head to take cover, putting his hands in front of his helmet, and the ball struck him flush on the hand

Sri Lanka have suffered a major injury scare on the eve of their Test series with Australia, with in-form batsman Kusal Mendis’s participation in the two-match series under a cloud.

Mendis was fielding under the helmet at short leg when Dilruwan Perera delivered a full toss to Jake Doran who pulled it hard straight into Mendis on day one of the visitors’ sole tour match against the Cricket Australia XI in Hobart.

The Sri Lankan had ducked his head to take cover, putting his hands in front of his helmet, and the ball struck him flush on the hand.

Mendis was in immediate discomfort as teammates rushed to his aid. Footage showed the pinkie finger on his right hand pointing at an unnatural angle and he was in obvious discomfort while being treated by medical staff from both teams as he left the field.

Mendis was a middle-order mainstay for Sri Lanka in their two-Test series with New Zealand that preceded this tour.

Mendis hit an unbeaten 141 in the second innings of the drawn first Test in Wellington, and followed that with 67 during the Boxing Day Test to top-score in Sri Lanka’s second innings.

When lay continued in Hobart, Roshen Silva took up fielding at short leg – wearing a bulky chest guard – and he too was struck as Doran continued to sweep powerfully.

Two balls after Mendis had left the field Dilruwan dropped short and Doran swept, clipping Roshen on the left hand.

He was moved out of the position for the final ball of that over with Kurtis Patterson on strike, but found himself back at short-leg for the first ball of the next over with Doran taking guard.

That ball was again smashed in short-leg’s direction, and Roshen took another nasty hit to his left forearm on the bounce, which saw him throw down his helmet in disgust and grimace in pain.

It prompted Sri Lanka skipper Dinesh Chandimal to abandon the short leg fielder position altogether, although he might not be so charitable to his fielders if they have Australia at 5-135 in a Test match.

August 20, 2018 byMalik No Comments
Four Japanese basketball players have been sent home from the Asian Games for allegedly paying women for sex.

Kulasekara to retire from international cricket (updated with quotes)

July 24, 2019 byRevatha No Comments
Nuwan Kulasekara, 37, known as 'Kule' by his erstwhile fans is to retire from international cricket