Sri Lankan ambassador to Vienna recalled for not answering phone

September 15, 2018 by The Sunday Morning No Comments 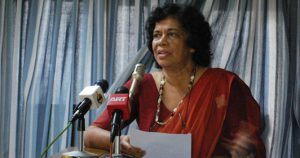 President Maithripala Sirisena has recalled his top envoy to Austria and five other embassy staff for failing to answer his long-distance telephone calls, the AFP news agency quoted officials as saying.

Ambassador Priyanee Wijesekera was given her marching orders after calls made by Sirisena to the embassy in Vienna last week went “unanswered for several hours,” an official source said.

The source declined comment on why Sirisena needed to contact the embassy urgently or why he did not attempt to do so through the Foreign Ministry.

The Ministry of Foreign Affairs confirmed the recall, but did not give a reason.

The Sri Lankan embassy in Austria is also accredited to UN agencies in Vienna as well as Bosnia and Herzegovina, the Czech republic, Serbia, Slovakia and Slovenia.

Earlier this week, Sirisena flew into a rage over nuts served aboard the island’s national carrier saying they were unfit “even for dogs.”

“Returning from Kathmandu, I was served some cashews on board a SriLankan flight, but it was so bad even a dog wouldn’t eat it,” he said on Monday.

An airline spokesman said it has responded by clearing its stock of cashews — only served in business class — and would change its Dubai-based supplier.

June 5, 2019 byRandev No Comments
The Maha Sangha of all Buddhist Chapters requested that all Muslim Ministers who had previously resigned from their post, resume their Government duties.