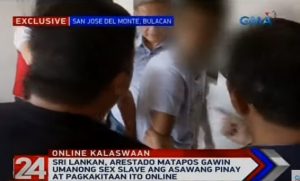 A Sri Lankan national was arrested by operatives of Philippine’s National Bureau of Investigation (NBI) for turning his Filipina wife into a cybersex slave.

According to a report by GMA News 24 Oras, the foreigner was caught in his home in San Jose Del Monte, Bulacan after his wife sought help  from authorities.

For seven months, the woman said she was forced to have sex with him over livestream and viewed by the Sri Lankan’s foreign clients.

The woman said she decided to seek help from the NBI after the Sri Lankan started molesting her daughter from a previous relationship.  The foreigner also sent a copy of their sex video to her relatives.

The Sri Lankan cannot be named in order to protect the identities of the wife and stepdaughter.

A television report of the raid in San Jose Del Monte by John Consulta for GMA News included a brief interview with the suspect.

When asked by the NBI, the Sri Lankan said he did it for the money. “It’s because we don’t have any option, I don’t have money,” he said.

He then appeared to justify his acts by saying he loved his wife, before an angry NBI agent shouted him down, saying: “If you love her why were you making love in public?”

In an interview with the camera crew, the wife described how her husband would force her to comply with his demands by physically assaulting her. She also said that he had previously been a reliable provider whom she had trusted.

Ronald Agulto, chief of NBI Interpol, said the Sri Lankan could face charges for violation of RA 9208 or Anti-Trafficking in Persons Act of 2003, RA 9262 or Anti-Violence Against Women and Children Act of 2004, and the Cybercrime Prevention Act of 2012.

April 22, 2020 byTSM Web Desk No Comments
PCR tests were carried out today on over 500 fish vendors and employees of the Peliyagoda Fish Market complex.