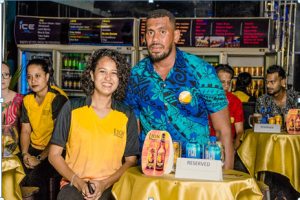 The arrival of Lion in Fiji was marked with an official launch event with significant media coverage in its capital Nadi, attended by former National Fijian Rugby 7’s captain Kalione Nosoko, alongside other dignitaries including ambassadors from across the world, Lion said in a press release.

Furthermore, the brewery together with its Fijian distribution partner, Lyceum Global Trading, will host a mega launch event in Suva next month, the second largest city in Fiji.

“The advent of our beers into Fiji opens an exciting new chapter of the Lion story, as this historic Sri Lankan brand grows its presence around the world. Lion’s desire for quality alongside its unparalleled flavor has made it immensely popular amongst beer connoisseurs the world over, and our presence in Fiji will provide an ample platform to serve other markets in south and central Pacific region,” states Suresh Shah, Director and CEO of Lion Brewery Ceylon PLC.

The Lion portfolio is already on shelves at popular retail outlets generating great interest amongst consumers – especially Lion Strong. Lion will soon become available at all popular hotels, resorts and clubs whilst online orders and a home delivery model is also being set up.

As part of its next phase of growth, Lion will look to expand its footprint into New Zealand, Samoa, Vanuatu, Kiribati and New Caledonia. Lyceum Global Trading Director, Peter Narayan, states the wholly Fiji-owned company is driven by its vision to provide superior quality and affordable products to local beer lovers. “Lion has etched an illustrious path in the market, infusing world-class best practices, innovation, state-of-the-art technology and a knowledge pool beyond comparison,” he added.

Lion beers will be promoted at sporting events, on radio and national television and the brand has already got listings at high profile supermarket chains like Carpenters Group and R P Patel and more.

Lion beer is available at high-profile bars and restaurants across Europe, Africa, North America and Asia and is fondly promoted by a passionate Sri Lankan expatriate community. Lion has won prestigious awards such as the Monde Selection, World Beer Awards and the New York International Beer competition.