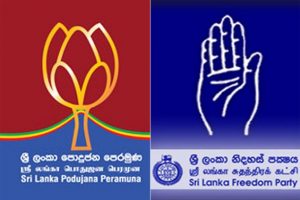 Talks between the Sri Lanka Freedom Party (SLFP) and the Sri Lanka Podujana Peramuna (SLPP) on forming a political alliance have hit a snag over the failure by both parties to reach a consensus on the symbol of such an alliance.

The SLFP team is resolute in its stance that it cannot contest under the SLPP’s “flower bud” symbol while the SLPP maintains that the proposed alliance should retain the “flower bud” symbol as it is a well-known political symbol.
The eighth round of talks between the SLFP and SLPP was held on Friday (6).

The SLFP however maintains it will give priority to forming an alliance with the SLPP over fielding its own presidential candidate at the upcoming presidential polls.

“We held talks on Friday as well with the SLPP group. Forming an alliance with them is our main objective right now. Fielding our own candidate is secondary,” Amaraweera said.

On Thursday (5), SLFP General Secretary MP Dayasiri Jayasekara announced that the party would be fielding its own candidate to contest the upcoming election.

Amaraweera, however, noted that only if an alliance failed would the SLFP put forward its own candidate.

“If talks with the SLPP regarding an alliance fail, then we will opt to nominate our very own candidate for the presidential election,” he said.

When queried as to who may be a possible candidate for the SLFP, Amaraweera responded that such a decision had not been taken.

When The Sunday Morning questioned as to whether President Maithripala Sirisena was an option as a candidate for the SLFP, Amaraweera replied that the party would decide when the time was right.

Sajith gets most votes in Nallur, Jaffna

November 17, 2019 byEaswaran No Comments
New Democratic Front Presidential candidate Sajith Premadasa secured the most number of votes in the Nallur polling division in the Jaffna District.

Over 400 COVID cases yesterday, 193 from Kalutara

December 23, 2020 byMihi Perera No Comments
A total of 193 COVID patients were identified from the Kalutara district yesterday (23), including 162 persons from the Atalugama area.