Stands made in the past need not be repeated 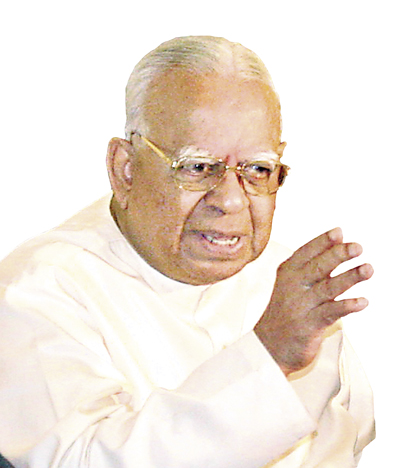 While acknowledging that the Tamil National Alliance (TNA) considered the Janatha Vimukthi Peramuna (JVP) as a serious contributing factor to the change needed in Sri Lanka, the TNA asserted that they are yet to decide on whom to back at the upcoming presidential election.

In relation to siding against the Rajapaksas, TNA Leader MP R. Sampanthan stated that just because a decision was taken against someone in the past, it didn’t necessarily mean that the decision would have to be repeated.

Has the TNA decided on their stance with regard to the presidential election?

No. We cannot consider anything in relation to the presidential election because we still don’t know who the candidates are going to be, and the parties are yet to announce their decisions.

It is only the United National Party (UNP) that is yet to announce that. Does that mean that the TNA will choose someone else if their candidate is not desirable to your alliance?

We can make no decision with regard to the matter until we know who the candidates of each party are going to be and what their policies are going to be. We can give this matter serious consideration only once that information is available.

In the past, the TNA has sided with the UNP – almost by default – as an anti-Rajapaksa move. Why then is there hesitation this time around to do the same?

The fact that we took a decision against someone in the past does not mean we have to do the same thing again. We are prepared to address the issue with an open mind depending on what their present position is.

Which parties have approached the TNA thus far to form an alliance?

I wouldn’t say any party has approached us, except for the fact that there have been some informal, friendly discussions on and off.

Prime Minister Ranil Wickremesinghe and his UNP have failed to deliver on their promises regarding the national problem. Do you believe in any way that Gotabaya Rajapaksa would fulfil those promises?

Ranil Wickremesinghe was engaged in a process that went on for some time and a lot of work was done. The lack of co-operation from everyone seems to be the reason for the fallback.

The JVP has emerged as a force that seems to genuinely care for the plight of the minorities. Does the TNA and its supporters agree?

Is there any possibility the TNA will join forces with the JVP?

We have not taken any decision with regard to the matter. But as I said before, everything is open.

What demands does the TNA have in exchange for its support?

The position of the TNA is well known. We want the national question to be resolved within the framework of a united, undivided, indivisible Sri Lanka based upon maximum possible devolution and the recognition of the self-respect and dignity of the Tamil people and equality.

A TNA delegation is expected to visit New Delhi soon. What do you hope to discuss?

When Prime Minister Narendra Modi was in Sri Lanka, the matter was discussed and we have been asked to come to Delhi. So we are hoping to undertake that journey shortly.

What does the TNA hope to discuss?

The fact that Sri Lanka has not yet delivered on its commitments on the national question.

I think in the present context, when there is a lull in movement, it is necessary that the international community, to whom commitments have been made by Sri Lanka, should activate themselves and make the Sri Lankan Government realise that those commitments have to be delivered at once.

What do you expect of India in this regard?

We expect India to play a role with regard to the resolution of the national question. (Former) Prime Minister of India Dr. Manmohan Singh said, when he was in office, that India is very seriously concerned with the plight of the Tamils in Sri Lanka.

One must not forget that there are 60 million Tamils in Tamil Nadu just eight miles away from the Palk Straight. We only want justice, equality, self-respect, and dignity within a framework of a united, undivided, indivisible Sri Lanka. We are committed to that.

Do you see a future where there will be an elected Tamil or Muslim president in Sri Lanka?

As things are at present, I don’t think it can ever happen. It has happened the world over. Sikhs have been prime ministers of India and Muslims have been presidents of India, but I don’t see in the present context how it will ever be possible in Sri Lanka.

Part of a multi-ethnic society

May 27, 2019 bythemorninglk No Comments
There are times when discussions on ethnic and religious divides come to the forefront in society, and one such time is now. It has become a topic of discussion...