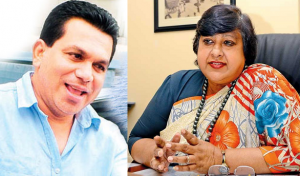 A leaked telephone conversation between Avant-Garde Chairman Nissanka Senadhipathi and purportedly the former Director General of the Commission to Investigate Allegations of Bribery or Corruption (CIABOC), Dilrukshi Dias Wickremasinghe has made startling revelations.

“I can make or break the Law,” the female voice said to be of Wickremasinghe is heard saying in the audio clip.

In the respective phone conversation, Senadhipathi speaking to Wickremesinghe says, “Over 4000 employees have lost their jobs and homes as a result of the closure of Avant Garde Maritime Services.”

In response to Senadhipathi’s statement Wickremasinghe says, “I never expected the business (Avant Garde Maritime Services) to close down, because this is one of the best businesses in the country. If I had the slightest knowledge that the business would collapse, I would never have filed the case.  I have personally read more than 7,500 letters from your office; hence I know how you have looked after the families of your employees who were in trouble. I am truly very sad about what has happened. I wouldn’t file a complaint against Gotabaya Rajapaksa. I know how to break the law and make the law.”

She further blames the disruptive politics in the country for the reason behind the Avant Garde case.

However, several attempts to contact Wickremasinghe to confirm the telephone conversation proved futile as she was unavailable in her office.

Senadhipathi said the former Bribery Commission head had made the call “out of guilty conscience.”

Senadhipathi added that the call was made by Wickremasinghe about three months ago.

When The Sunday Morning contacted the current Director General of CIABOC, Sarath Jayamanne regarding the claims made in the telephone conversation, he said he was not in a position to comment on the matter.

The Commission to Investigate Allegations of Bribery or Corruption On November 16, 2015, launched a special investigation into Avant Garde company firm as the Commission had received a complaint against it and filed an action at the Magistrate’s Court against Senadhipathi and eight others alleging that the government had incurred a loss of Rs. 11.4 million by allowing Avant-Garde Maritime Services to operate a floating armoury.

Meanwhile the Attorney General on 10 September filed indictments comprising 7,573 charges before
the Trial-at-Bar in Colombo High Court, against Chairman of Avant-Garde Senadhipathi and 13 others
over the Avant Garde arms trafficking case.

December 6, 2019 byTSM Web Desk No Comments
The CBSL with the Ministry of Finance has taken action to draft a law for licensing, regulation and supervision of money lenders and protection of customers.

July 21, 2019 bythemorninglk No Comments
The TNA is to meet with President Maithripala Sirisena to discuss the issue of Hindu kovils being arbitrarily taken over by the Archaeological Department and being recognised as Buddhist sites