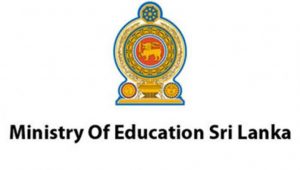 The Ministry of Education last week had announced they are out of a budget until the 2021 Budget is presented in December and that they would not have allocations to repair or purchase inventory items such as classroom furniture and other amenities until then.

Speaking to The Sunday Morning, Ceylon Teachers’ Union (CTU) General Secretary Joseph Stalin said: “The lack of funds is not something we are going to experience just in the coming months, but we have been dealing with it throughout. With additional safety and health precautions that need to be followed, schools are also facing the added burden to keep the hand washing stations functional.”

According to Stalin, schools are now requesting students to buy soap that needs to be placed at the hand washing stations. He also added that since all the grades are now attending school, even the sinks and taps are in very bad shape due to overuse.

“The Ministry really has to think this through; we boast about free education, but it is not free anymore. Even the nutrition programmes that were carried out are now derailing due to a lack of funds. How are we to provide the best for the students when the students have to bring even the bar of soap from home?” Stalin questioned. He also pointed out that come December, the Government should think about distributing uniform material or vouchers to purchase readymade uniforms for the children as well as print textbooks, raising concerns on whether the Government would once again delay distributing essentials that are given for free for the students to commence their next academic year.

The Sunday Morning contacted State Minister of Women and Child Development, Preschool and Primary Education, School Infrastructure, and School Services Piyal Nishantha de Silva regarding the issues that have been raised. “We have called the relevant officials now for two meetings and it was when I first went to meet them that these budgetary deficits were brought out. I have given them clear instructions that we cannot have delays in attending to school maintenance and distributing textbooks, school uniform material, vouchers to purchase materials, etc.,” de Silva noted.

He added that necessary steps will be immediately taken to address these issues. However, de Silva also admitted that not only the education sector, but many other sectors too are facing such budget deficits, given that the Budget will be taken for debate in the last week of November.

He concluded saying that timely updates of anticipated situations at school level can avoid delays and distress caused to schoolchildren, teachers, and the school administration alike.

October 30, 2019 byEaswaran No Comments
Five Tamil political parties who met today with regards to the Presidential election further postponed their stand on the issue and told Tamils to vote for any candidate they like during the postal vo