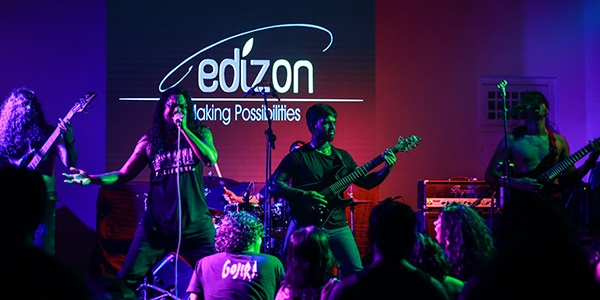 Asia Music Video Awards is an online based competition hosted by US based ChannelFix.com, which allows contenders from across Asia to submit their music videos, showcase their music to the world and win amazing cash prizes and an opportunity to produce a music video with Swedish music producer David Sivano.

And Stigmata is absolutely rocking it! They’ve made it to the semi-finals, taking the Sri Lankan flag high along the way. We spoke to Suresh De Silva, frontman of the band, to find out more.

“This competition allowed us to showcase our pure Sri Lankan metal music and showcase it around the world against some serious competition across Asia. Our fans have been extremely supportive and they’ve really helped us get to the semi-finals by voting for us.”

The band received an email from ChannelFix.com about the competition, asking them to consider applying for the competition and that the channel had come across their work and found it to be good.

“We normally never enter competitions as we usually have way too many gigs on our hands or due to the lack of time. But seeing that the Asia Music Video Awards was well-recognised and substantial, we decided to check it out,” says Suresh.

Stigmata submitted their first video to their song, ‘Heavy is the head that wears the crown’, which was done as a tribute to the movie, Avengers: Infinity War. They worked with Meraki United to create an amazing video with the cosplayers from the local Comic Con and this was used for the trailer of the Comic Con as well. Check it out here:

Videos were selected based on popularity, quality of production and the song as well.  Votes sky-rocketed and Stigmata quickly gained ranks amongst 250 other talented artistes across Asia, with the band being the only one in the rock and metal genre as well.

For the third phase, they submitted a new song called, ‘An Idle mind is the Devil’s workshop’ and worked with Meraki United’s Randy Perera again to create Sri Lanka’s first fully animated video.

The band has been around for the last 18 years, since 2003, releasing four albums, a DVD and even appearing on BBC and Discovery Channel, doing wonders for the metal scene in the country. They pride themselves for being the very first heavy metal band in Sri Lanka and the only metal band to have incorporated a Sri Lankan flavour and element to their music, which no other metal band does internationally. This has attracted a lot of attention and fans and catapulted them to popularity, especially when they tour overseas and offer something fresh and unique that people haven’t heard before.

The tournament started in July 18 and will end September 20, 2018. If you are into Stigmata, support them by voting for them on this link and help them put Sri Lanka and their unique genre of pure Sri Lankan metal music on the world map for music.

Check out their official FB page for more details.

March 3, 2019 bythemorninglk No Comments
On the night of 22 February, the band Unscripted gave life to a three-track release titled ‘To You’.