Still no cheers for alcohol industry

May 23, 2020 by Madhusha Thavapalakumar No Comments 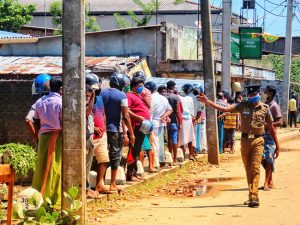 Even though liquor sales have partially resumed after a complete ban for eight weeks, the industry is still struggling due to the prevailing restrictions, The Sunday Morning Business learns.

According to industry sources, the current sales volumes are not even half that of pre-Covid-19 times, due to the continued closure of restaurants, bars, and pubs and the ban on selling at wine stores in the Colombo and Gampaha Districts.

Our sources noted that there are about 1,500 restaurant liquor licenses in the country.

“The total number of off-premises licenses are about 1,200, but the number of restaurant liquor licenses are over 1,500. Restaurants are completely closed and we are getting zero sales from them,” the official added.

The Department of Excise’s permission for supermarkets to sell liquor has done little for the industry.

“Supermarket numbers are very small. Cargills Food City has 67 liquor licenses, Keells has 16, Laugfs has 14, and Arpico has 12 licenses. These are the total countrywide numbers. They do not even contribute 5% of our total sales,” the official noted.

An industry insider stated that it is the supermarkets that are benefitting from this more than the manufacturers, as customers at the bottom of the pyramid, i.e. those who usually buy regularly in small quantities, usually do not go to supermarkets to buy liquor.

In addition to this, the official added that most of the supermarkets that sell liquor at the moment do not sell them in small or affordable quantities, thereby further depriving these customers and encouraging them to go for illicit liquor.

Moreover, manufacturers are faced with issues pertaining to filling the pipeline, i.e. filling up the value chain with products so that they are available at launch. Restrictions on district-to-district travel has delayed transportation of stock to dealers and spirits to manufacturing units.

“The Government has given the green light for the transportation of goods, but the Police ask for curfew passes. It’s the same with the collection and transportation of spirits that are required for manufacturing because we have to collect from the local distillers and manufacturers of spirits, and then bring it to our warehouses. We have to get a curfew pass for the excise license to transport. There are delays as a result,” the official noted.

Even though the industry expects that pipeline filling activities would go back to normal within a week, they are worried over pending payments from dealers as they too are financially suffering from the pandemic and finding it difficult to settle dues soon.

Nevertheless, on a positive note, the industry is welcoming the move by the Government to at the very least partially reopen the industry, as they entirely depend on sales to settle taxes.

“Within 14 days of production, we have to pay the taxes, irrespective of whether we sell or not. We had already paid the taxes, but we could not earn income from the sale of the product. There was a lot of money that was blocked,” the official noted.

Sri Lanka’s liquor industry is one of the top contributors to the country’s tax revenue and they lost their annual Sinhala and Tamil New Year and Easter sales as well this year, owing to the curfew imposed to mitigate the spread of Covid-19 within the country.

As noted by the industry, the losses were in the billions during the festive season alone, as Easter and New Year sales collectively bring in significant revenue, similar to that of Christmas any given year. An official from a renowned liquor manufacturer stated that the company had lost sales of the value of about Rs. 3 billion that they were expecting to make during this festive season.

According to the official, sales are usually at 150% during this festive season compared to other months, and the seasonal liquor sales usually start to kick in from 20 March and last until 30 April.

The Government’s revenue also took as much of a hit as the company, given that over 70% of the company’s revenue is settled as taxes, noted the official.

Meanwhile, an official from an established distillery stated that their estimated loss due to the Covid-19 curfew during the festive season is over Rs. 5 billion.

When asked about their forecast for the rest of the year, the official noted that the market should rebound in the coming months but that is entirely dependent on the disposable income of the people in the months to come.

According to a study done by LOLC Securities, Sri Lanka records a high per capita alcohol consumption rate in the South Asian region. The significant loss in seasonal liquor sales is expected to reduce the Government’s revenue considerably.

After identifying the first Sri Lankan Covid-19 patient, the Government announced curfew starting from 20 March, which is still in effect in two districts. Even though curfew was lifted once every few days for a few hours, excluding the districts of Gampaha, Colombo, Jaffna, Kandy, Puttalam, and Kalutara, liquor shops were requested to remain closed during these hours.

May 14, 2019 byCharindra No Comments
Sri Lanka Tourism will be participate in an international exhibition to be held in Thailand later this month, the first newly scheduled promotion to be held abroad since the Easter attacks.

August 21, 2018 byCharindra No Comments
Sri Lanka’s LVL Energy Fund plans to invest US$ 10.8 million (Rs 1.7 billion) in a thermal power plant in Bangladesh, in addition to its Rs. 465 million investment in a hydro power plant in Nepal.