The issue of ragging dominates national conversation every time an unfortunate incident of such takes place, such as the recent incident at the University of Sri Jayewardenepura. After a few weeks pass, a new topic takes over and the former conversation dies down, but ragging as an activity continues in universities…and the vicious cycle continues.

The tragedy of ragging is that students have died – some have died by committing suicide and some as a result of violence that is often part of the rag – while many more live with emotional wounds that cannot be cured. These are only the known, reported cases. The damage caused by ragging is probably more far-reaching than what we could imagine. Many students continue to have mental health issues, maybe not even realising that the rag is the reason behind what they go through now.

The reason behind ragging is easy to explain, and it is the same reason behind many social issues. “The system has been politicised.” Let’s take a look at this statement – what does it mean to politicise a system? At a surface level, “politicisation” means that a political party or an affiliated organisation of a political party is taking control over things. But at a deeper level, it is far beyond that. 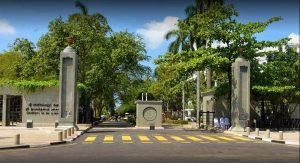 The main entrance of the University of Sri Jayewardenepura, which has been in the headlines of late.

Within the university system, there have been many attempts to prevent ragging. For a while, military training was provided by the Government for all students. There exists a separate office in most universities called the “Marshall Office” to identify students involved in ragging and to ensure university security. All solutions are completely disconnected from the actual problem; if the solutions provided worked, we would not be having this discussion.

Our university system is disconnected from our economy and does not follow any incentive structure to produce dynamic graduates who would be in demand. That is the fundamental reason behind many unnecessary activities inside our university system. One of the reasons Sri Lanka is viewed as an uncompetitive location to set up a business is the lack of graduates who suit the demands of the labour market. Our universities are stagnant institutes and the flow of knowledge, ideas, and culture is restricted on several levels.

It is true that we have produced great scholars, academics, and scientists, but we should not concern ourselves with the handful of those who reach the top – they are the outliers in this scenario. We should focus our attention on what happens to the rest. Sri Lankans tend to focus on these outliers and brush the majority of the students under the rug; a case in point would be the students who successfully pass their Advanced Level (A/L) exams, qualify to enter university, but are not admitted. For the 2016/2017 academic year, only 19% of the students who qualified to enter university were admitted. It’s time we shifted our focus to the source of the problem. 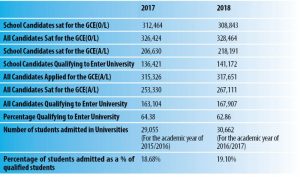 Ragging is just reaping what has been sowed. Flaws within the university system have provided space and opportunity for certain political forces to step in and exert their influence.

Lecturers, political appointments, and policymakers have to be held responsible for this. While I clearly stand against those who are behind ragging and believe that whoever is responsible should be brought before the law, we also need to fix the system as a whole.

Unless our university system is overhauled and restructured in a manner that equips students with the skills demanded by the economy and provides a qualification that translates into skills and knowledge that can be leveraged into gainful employment, we are unlikely to see a solution.

I was a member of the Students’ Council of the Faculty of Science at the University of Colombo when I was a student there. I represented the faculty board as the student representative for more than two years. The Faculty of Science was considered to produce the cream of the crop, with graduates going on to study at the best universities abroad, but the reality was far from this. The faculty was decades behind the rest of the world.

Once one of my friends compared his father’s lecture notes with the notes given by our current lecturer, and the notes were exactly the same. Either the university has been teaching a subject which has not evolved in the modern day or the lecturer has not been evolving with the subject. Can we expect innovation to take place and produce graduates in competitive industries to compete at a global scale if this is the situation in our lecture halls? How can the Government justify its expenditure on tertiary education when it funds an archaic educational system that clearly causes harm to its students?

In the Faculty of Science at the University of Colombo, there was no re-correction system after the exam. If a mark was given by the lecturer, that was it – you could not question the marks. I have come across many instances where some lecturers deliberately gave lower marks as a result of personal biases against students. Once one of my batchmates asked the lecturer just to re-check whether the addition of the marks was correct as he was so sure about the answers he had provided. The lecturer said: “I can do that, but I have to demote your result from a C+ to a D- even if the marks were added wrong.”

If the university system does not promote transparency, can we expect these students to be transparent when they join the labour force?
Selecting students for a special degree is another rat race. After the first two years, based on the student’s performance, they will be eligible for a subject stream in which they can specialise. In the Faculty of Science at the University of Colombo, the chemistry special degree is considered the most prestigious. Since the number of special degree opportunities is limited, it was common for students to hide some books in the library and even tear out pages in certain valuable books to make sure no one else gets the opportunity to study what they studied.

The competition varies based on the opportunities available in main universities in America. Once my Students’ Council President received a complaint from a molecular biology student that a mathematics student had been eligible for a molecular biology special degree as per the results of the Department of Examination. To put the issue in context, this is similar to an arts A/L student being accepted to the Faculty of Medicine. The subject streams are completely different. The impact was serious. Since this is a limited opportunity, the student who was next in the list lost the chance to do the molecular biology special degree. When we took this to the Dean and the heads of the Department, you would have been surprised at the solution they provided. They increased the special degree intake by one student and allowed the mathematics student to continue doing the molecular biology degree. I can provide 100 similar examples on the backwardness of the Faculty of Science.
There is no mechanism to evaluate the lectures, their content, and whether they teach what is required by the industry and the modern-day world. When a system is stagnant and not based on proper incentives, the connected stakeholders become a slave and victim of the same system itself. And ragging is a byproduct of an outdated, unevolved system.

Identifying the reasons for government inefficiency is not that hard; 77% (1) of our university graduates are employed in the public sector. This goes up the hierarchy from grama sewa niladaris to secretaries to key ministries and even to the Central Bank. So the people in senior positions in government institutes are coming from a background and culture of inconvenience and a system which is stagnant.

Imagine a similar incident taking place in a private university. The chances are very low because it is a competitive system. This doesn’t mean our private universities are a flawless, perfect system, but undoubtedly there are lessons we can learn. If you look at some private educational institutes, the students evaluate the lectures and there is an incentive for the lecturer based on the student’s voting. To an extent, constant upgrading of content is included in the system.

The solution for ragging is beyond implementing strict punishments. While the importance of enforcing the law and ensuring the culprits are brought to justice cannot be understated, there is more that has to be done. Sri Lanka is in dire need of a university system that promotes transparency and incentive system and updates to the curriculum that connect to our economy. Just slapping a plaster on this issue will worsen the situation.

How Chinese is Sri Lanka’s debt?

February 1, 2019 bythemorninglk No Comments
China is an easy target, but how much is this economic giant really to blame for Sri Lanka's debt problem?