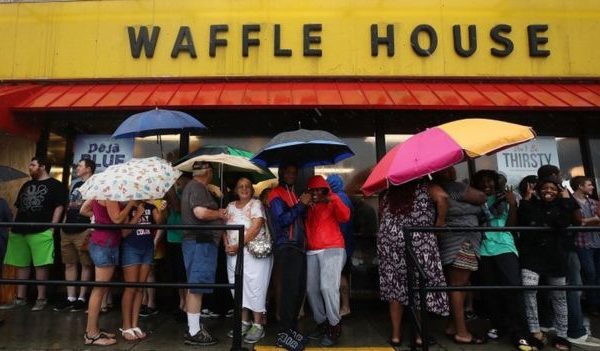 The coastal city of Wilmington, North Carolina, has been cut off from the rest of the state because of heavy floods following Hurricane Florence.

Officials say all roads in and out are now impassable and have warned evacuated residents to stay away.

About 400 people have been rescued from flood waters in the city, described as an island within the state.

Two of the first known fatalities – a mother and her seven-month son – were reported in the city on Friday morning.

At least 15 other people are reported to have died in storm-related incidents across North and South Carolina since Florence made landfall on Thursday.

In Wilmington, with its population of about 120,000, some 400 people have had to be rescued from flood waters, and most of the city remains without power.

The National Weather Service has warned of at least two further days of possible flash flooding in the area before conditions are forecast to improve.

“Our roads are flooded, there is no access into Wilmington…We want you home, but you can’t come yet.”

The area is usually best known as a filming location for US dramas One Tree Hill and Dawson’s Creek.

US basketball legend Michael Jordan – who is fundraising to help residents affected by the storm – also grew up in the city.

Many roads inside Wilmington are still passable for residents who defied evacuation orders to ride the storm out.

But a city-wide curfew has been extended after five people were arrested on suspicion of looting from a store in the city on Saturday.

Florence has now weakened into a tropical depression with winds of 35mph (55km/h), according to the National Hurricane Centre

Some parts of the Carolinas have seen up to 40in (100cm) of rain since Thursday – and officials have warned river levels are yet to peak in places.

“The storm has never been more dangerous than it is right now,” North Carolina Governor Roy Cooper said on Sunday.

“Wherever you live in North Carolina, be alert for sudden flooding.”

The governor also warned of the potential danger of landslides once the weather system reached more mountainous areas.

The US coast guard and volunteer boats have been helping people left stricken by rising flood waters across the states.

Officials in North Carolina have said about 900 people have been rescued from floodwaters there, and about 15,000 people are still in emergency shelters.

US President Donald Trump has declared a disaster in several North Carolina counties – a move that frees up federal funding for recovery efforts. (Courtesy BBC)

August 1, 2019 byTSM Web Desk No Comments
The US Treasury Department has placed sanctions on Iranian Foreign Minister Mohammad Javad Zarif, after threatening to do so for several months.