The National Movement for Consumer Rights Protection (NMCRP) last week raised concerns on the quality of fuel distributed by Lanka Indian Oil Company (LIOC). During a recent media briefing, NMCRP Chairman Ranjith Withanage shared an analysis report that he had obtained from the Ceylon Petroleum Corporation (CPC) refinery for a sample of 92 octane petrol that was obtained from a LIOC fuel station in Colombo. 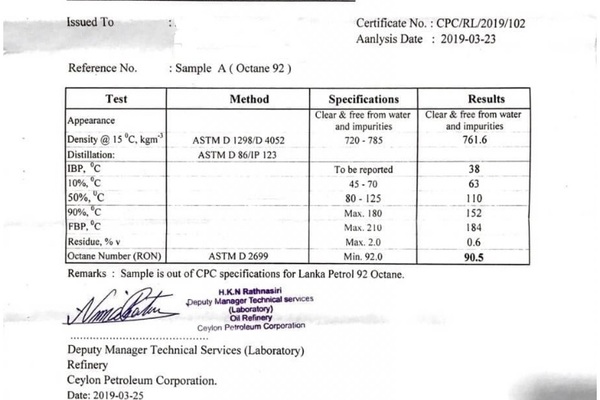 Analysis report of a sample of 92 octane petrol obtained from a LIOC fuel station in Colombo.

“We have been closely monitoring the substandard fuel issue for nearly a year, and in February, the NMCRP complained about the issue to the Consumer Affairs Authority (CAA). Following that complaint, the Consumer Rights Authority had obtained some samples from LIOC fuel stations and sent them for analysis to the CPC refinery lab,” Withanage said.

The analysis report that was released on 25 March that was signed off by the CPC Refinery Deputy Manager – Technical Services (Laboratory) remarked that the sample that was tested was out of specification and had an octane number of 90.5.

“This is just one such example. We have also tested the Euro 3 standard fuel which has an octane number of 87.5, but consumers are paying a hefty sum for this premium-grade fuel,” Withanage added.

He further alleged that regardless of the different specification labels pasted on the fuel dispensers, the consumers are being fooled by these companies to purchase the same type of petrol or diesel.

The Sunday Morning contacted LIOC Managing Director Manoj Gupta for clarification regarding these allegations: “We are just learning from media reports regarding the substandard fuel issue. To the best of our knowledge, all the fuel products that we disburse to the market are according to specification; we run tests before we send the product into the market and then conduct spot checks to ensure the product is not contaminated.”

Gupta also stated that should anyone need to check the specification of their XtraPremium Euro 3 petrol or XtraPremium 95 octane petrol, the samples could only be tested at their lab situated in Trincomalee. 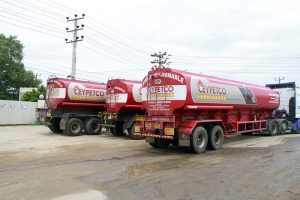 In order to obtain a clarification from the CPC over the allegation that the said substandard fuel batch was dispatched to the LIOC fuel station by the CPC, The Sunday Morning contacted CPC Managing Director Neil Jayasekara.

Responding to our query, Jayasekara said that over the past few months, there had been no reports of substandard fuel in the market.

“You must be well aware that we had turned away an entire shipment of substandard fuel in the past year as it was out of specification. As a responsible state corporation, we run tests on the products that are in storage at our terminals in Kolonnawa and Muthurajawela. Furthermore, once the products are in the market, we do spot investigations by obtaining samples from the fuel stations.”

He further questioned as to where the NMCRP obtained the fuel sample and as to why they did not receive a formal complaint from such an organisation if it was a serious issue.

We posed the above question to the NMCRP Chairman to which he responded that the petrol sample was obtained from the LIOC fuel station located at Adamaly Place, Colombo 4.

Even the LIOC Managing Director noted that if such a complaint was made at the CAA in February and the report was obtained in March, they should inform the relevant company of such an investigation. “We were not alerted about such an incident and we too were surprised to read such allegations through media reports.”

When asked whether they obtain fuel stocks from the CPC to be distributed to Colombo and its suburbs, Gupta responded: “We obtain fuel stocks from the Ceylon Petroleum storage terminals as they are equipped to store fuel. Before we obtain the products for distribution, we get a lab report on the quality of the product, so there is no way that the fuel was contaminated. Also, the allegation that it is the same type of product that is sold under different names is baseless.”

Meanwhile, Minister of Highways, Road Development, and Petroleum Resources Development Kabir Hashim too requested his ministry officials to look into the matter.

“The quality of the product needs to be tested at the time of obtaining the product; then if required, they would also run a test before dispatching the product for distribution. To check whether there is contamination following distribution, they are to also conduct spot investigations at fuel stations.”

Hashim further stated that if the allegations are true, then necessary action would be taken against all parties concerned.

August 12, 2019 bythemorninglk No Comments
Ragging at state universities has gone from bad to worse with torture chambers discovered in some and little action being taken to control the situation.