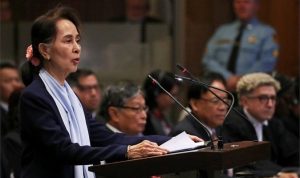 Myanmar’s leader Aung San Suu Kyi has defended her country against allegations of genocide at the UN International Court of Justice (ICJ).

In her opening remarks, she called the case against Myanmar “incomplete and incorrect”.

She said troubles in Rakhine, where many Rohingya lived, go back centuries.

Thousands of Rohingya were killed and more than 700,000 fled to neighbouring Bangladesh during an army crackdown in Buddhist-majority Myanmar in 2017.

Myanmar has always insisted it was tackling an extremist threat in Rakhine state, and Suu Kyi maintained that stance, describing the violence as an “internal armed conflict” triggered by Rohingya militant attacks on government security posts.

Conceding that Myanmar’s military might have used disproportionate force at times, she said that if soldiers had committed war crimes “they will be prosecuted”.

Suu Kyi – once celebrated internationally as a champion of democracy – has been de facto leader of Myanmar since April 2016, before the alleged genocide began. She does not have control over the army, but has been accused by the UN investigator of “complicity” in the military clearances.

Suu Kyi has chosen to stand up for the same army that kept her under house arrest for years.

She told the court her country was committed to the safe repatriation of people displaced from Rakhine, and urged the court to avoid any action that could aggravate the conflict. BBC

February 26, 2019 byRandev No Comments
North Korean leader Kim Jong-un has arrived in Vietnam for a summit with US President Donald Trump later this week.

November 13, 2018 byMalik No Comments
American writer and former president of Marvel Comics Stan Lee has died at the age of 95.