Swiss embassy staffer ordered to report to CID every month 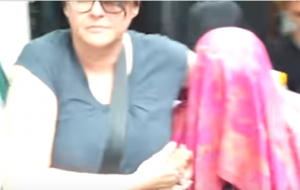 The court has ordered the Swiss Embassy employee to report to the Crime investigation Department(CID) on the last Sunday of every month.

The Swiss Embassy employee who was allegedly abducted was granted bail by the Colombo Magistrate’s Court on the 30 of December last year.

Accordingly, the Swiss employee was arrested on 16 December by the CID and produced before the Colombo Chief Magistrate’s Court.

The victim was under remand custody until she was bailed out on the 30 of December.

Number of COVID-19 deaths increased to 22 in SL

November 2, 2020 byCharindra No Comments
The number of COVID-19 deaths reported in Sri Lanka increased to 22 with the death of a 27-year-old male from Panadura, the Government Information Department said.

September 23, 2020 bythemorningeditor1 liberty No Comments
SLCFD celebrated the International Day of Sign Languages today (23) in an innovative way by sending postcards highlighting their issues to the President during the week leading up to today.