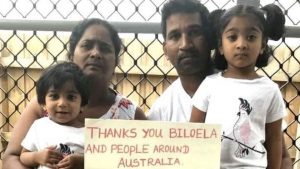 Australian Prime Minister Scott Morrison will not intervene to stop a Sri Lankan Tamil family being deported from Australia, saying an “exception here or there” would only kick-start the people-smuggling trade, ‘The Australian’ reported today.

The Prime Minister said today that he would never make any decision that could possibly be seen as a message to other asylum seekers who think they could settle in Australia via boats.

He has been under increasing pressure from Labor, former Nationals MP Barnaby Joyce and Sydney radio star Alan Jones to let a Tamil family of four to stay in the country.

On Monday, Morrison said his period as Immigration Minister meant he could not “in good conscience” allow the family to stay since they came by boat and have been found not to be refugees.

“I know what happens when people think it’s OK to make an exception here or there,” he said in Western Sydney.

“I remember what happened. I remember the deaths.

Priya and Nadesalingam, who arrived by boat separately as asylum-seekers in 2012 and 2013, were last night in a small, air conditioned cabin next to the Christmas Island public pool and sports oval with their Australian-born children Kopika, 4, and Tharunicaa, 2.

The family’s detention has seen protests across the country led by senior Labor figures and the regional Queensland town of Biloela, where the family have been living for the past five years.

Morrison said he understood the public mood, but would not change his mind. He also welcomed the family to make an application to return to Australia via the proper channels from Sri Lanka.

“I do understand the real feeling about this and the desire for there to be an exception but I know what the consequences are of allowing those exceptions,” he said.

“But they didn’t come to the country in the appropriate way. They have not been found to have an asylum claim.

“And to have changed our policy on this or to exercise intervention powers on this would be to send exactly the wrong message to those who are looking to sell tickets to vulnerable people looking to get on boats, it would send them the exact wrong message and that’s not something that I in good conscious can allow to happen and nor can my ministers.”

Dutton: Why the family can’t stay

Home Affairs Minister Peter Dutton has stared down “refugee advocates and Labor opportunists” he claims are spreading falsehoods about a Sri Lankan family held on Christmas Island, as their lawyer vows to keep fighting in the courts to keep them in Australia.

Priya and Nadesalingam, who arrived by boat separately as asylum-seekers in 2012 and 2013, were last night in a small, air conditioned cabin next to the Christmas Island public pool and sports oval with their Australian-born children Kopika, 4, and Tharunicaa, 2.

They were the only occupants of a once-crowded asylum-seeker camp on Christmas Island yesterday as thousands rallied around Australia for their return to the mainland. Carina Ford, the family’s Melbourne-based solicitor, is due in the Federal Circuit Court today and Federal Court on Wednesday in regards to the family’s possible deportation.

Writing in Brisbane’s Courier Mail today, Dutton said the family had to go back to Sri Lanka and had been denied refugee status by various courts in Australia.

September 10, 2019 byTSM Web Desk No Comments
UNP Parliamentarian Sujeewa Senasinghe said the contents of the disciplinary action letter forwarded to him by the UNP General Secretary was was unprofessional, irresponsible and vague.