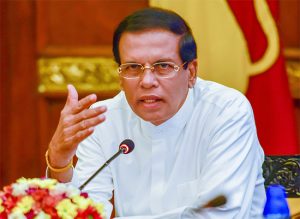 The term of the Presidential Commission of Inquiry to investigate corruption and malpractice in the state sector under the ‘Yahapalana’ Government has been extended.

The Commission which was due to expire on July 18 has been extended by a further three months by President Maithripala Sirisena.

The service extension had been granted upon a request made by the members of the Commission.

The five-member Commission headed by retired High Court Judge Upali Abeyratne was appointed by the President on 17 January.

UNP insists no written deal with the TNA

December 13, 2018 byEaswaran No Comments
The United National Party (UNP) today insisted that there was no written agreement reached between the UNP and the TNA to obtain the support of the TNA for UNP leader Ranil Wickremesinghe in Parliamen

National Vesak Week declared from May 4

May 1, 2020 byTSM Web Desk No Comments
The period from 4th to 8th May has been declared as National Vesak Week.