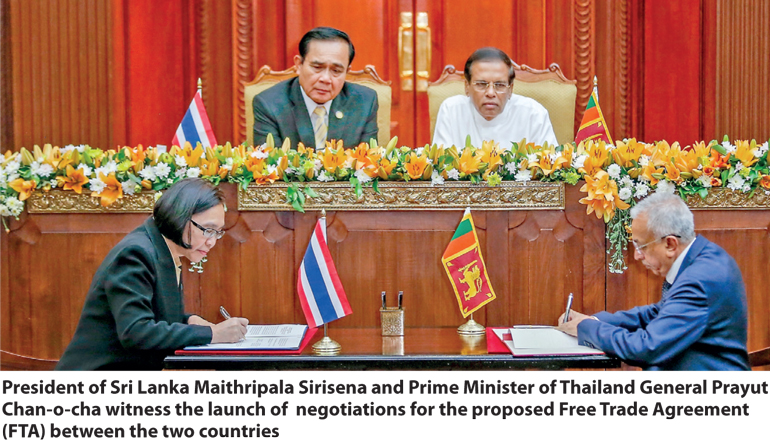 The proposed Sri Lanka-Thailand Free Trade Agreement (FTA) will face further delays as a feasibility study carried out on it has been rejected by the Department of Commerce, citing insufficient information, the Ministry of Development Strategies and International Trade told The Sunday Morning Business.

An official from the Ministry noted that the information submitted in the report was insufficient for the Department to arrive at a conclusion on whether to resume the next round of talks.

“In addition to the insufficiency of information, there were also lapses in certain areas and therefore, comments from the stakeholders were also negative,” the official said.

As there will be no cancellation of the agreement, the Ministry has now called for another feasibility study to be carried out and so far, four bidding proposals have been received by the Ministry for the project.

The official from the Ministry told us that a competitive bidder will be finalised soon and the recompiling of the feasibility study will commence as soon as possible.

When we contacted Department of Commerce Director General Sonali Wijeratne, she diverted us to the Ministry, saying the Department gave its opinion on the feasibility study to the Ministry. In June this year, Wijeratne was appointed as the Chief FTA Negotiator of the National Trade Negotiating Committee.

According to Ministry officials, the feasibility study was completed on 29 March this year and was sent to the Department of Commerce and Cabinet of Ministers for their reference.

The Ministry had earlier hoped to carry out the next round of negotiations towards the end of April in Colombo. However, due to the Easter incidents and an unsuccessful feasibility study, negotiations did not take place as scheduled.

The third round of negotiations of the Sri Lanka-Thailand FTA took place in Thailand early in March and the feasibility study was based on the outcomes of all three rounds.

Accompanied by the Ministry of Development Strategies and International Trade, nine to 12 subcommittees representing multiple departments in relation to the agreement joined the negotiations to discuss their requirements.

Following this, the Ministry temporarily halted the continuation of negotiations to decide whether to move on to the next round of negotiations or to make further amendments to what was negotiated thus far, based on the findings of the study.

Sri Lanka and Thailand launched discussions for the proposed FTA in July last year. The first round of negotiations was held on 13 July 2018 in Colombo, with the participation of Thai Prime Minister Gen. Prayut Chan-o-Cha.

Thailand hosted the second round of negotiations in September 2018. However, further negotiations were postponed amidst the political crisis that engulfed Sri Lanka in late October. Following the resolution of the crisis, the third round took place in March.

With regard to trade and investment relations, both countries reaffirmed its commitment to increase the bilateral trade volume to $ 1.5 billion by the year 2020, with the annual trade value between the two countries being recorded as $ 512.74 million in 2017. Both sides have also agreed on the need to enhance bilateral investment flows.

Thailand is also among the countries which were recently granted visa relaxation by the Ministry of Tourism Development, Christian Religious Affairs, and Wildlife to achieve the targeted tourist arrivals of 2019.

Services sector recovers in June from all-time low of May, Manufacturing expands

July 16, 2019 byCharindra No Comments
The Services sector recovered in June from its lowest level recorded in May and Manufacturing activities expanded at a higher rate in June compared to May, showing signs of a slight economic recovery.

July 23, 2019 bythemorninglk No Comments
PickMe, Sri Lanka’s home-grown digital mobility solutions provider announced recently that it is now one of Google Cloud’s key clients in the whole of South Asia.