The battle for nomination 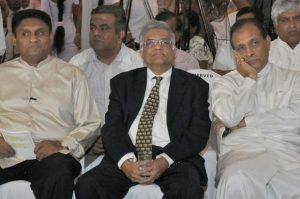 The United National Party (UNP), also known as the “grand old party” of Sri Lankan politics, is facing yet another challenge to its survival under its current Leader, Ranil Wickremesinghe.

Although Wickremesinghe has managed to wiggle out of every challenge to his authority in the past by resorting to his trademark tactic of appointing committees, the current issue surrounding the nomination of the party’s presidential candidate has the potential, unlike the issues of the past, to divide the party right in the middle.

Wickremesinghe, it appears, is a lonely figure at the top these days with even his most trusted lieutenant Malik Samarawickrama choosing to desert him. His legacy as leader of the party has been mediocre at best in the absence of any cohesive policy direction or the kind of authoritarian grip his predecessors, Ranasinghe Premadasa and J.R. Jayewardene had on the party.

Given that he ascended to the leadership by default, one cannot fault the man too much as he was clearly not cut out for the role that was thrust upon him following President Premadasa’s assassination in 1993.

To his credit however, Wickremesinghe craftily managed to keep a much more volatile bunch of MPs together, unlike those his predecessors inherited, despite the best attempts of various entities that use these politicians to drive their personal agendas.

It is also pertinent to recall that when President Premadasa was facing an impeachment motion brought against him by two of the most formidable party men at the time, Lalith Athulathmudali and Gamini Dissanayake, Ranil Wickremesinghe stood by Premadasa and weathered that storm. Today, we see a similar scenario with regard to the party leadership issue but ironically, Wickremesinghe’s main challenger happens to be Premadasa Jr.

Sajith Premadasa’s claim to fame and electoral success is very much rooted in his father’s legacy. His performance as Housing Minister is but a shadow of the Senior Premadasa who for all intents and purposes was an innovator and trailblazer in the role of Housing Minister. Junior has so far played copycat and not much else. He has also shown susceptibility to the machinations of crafty individuals whose avowed goal continues to be the disintegration of the very party he’s seeking leadership in.

The dilemma facing the UNP today is that both its current Leader as well as the main contender for the post, lack substance and are banking on circumstances rather than ability, to deliver them the goods.

Next week will be crucial for the party to put its house in order. Having presided at the top for over two decades now, the cries for Wickremesinghe to move on are getting louder by the day and given the long tenure he has had, is not an unfair call. After all, one is entitled to ask, what is he going to do different in the next five years that he has not done in the past 25?

However, having foregone two opportunities to be the party’s presidential candidate, Wickremesinghe certainly must have it within him to give it one final go. Being Prime Minister four times over is probably not the equivalent of being President at least once.

At 70-plus, Wickremesinghe is well aware that it’s now or never. But the issue is, will he let personal ambition compromise the larger interest of the party? This is what the young MPs like Harin Fernando and Ajith Perera, among others, fear, for should Wickremesinghe work his way to the nomination as he is wont to do, they see the writing on the wall, which would result in five years of political hibernation. It is something they would rather avoid by voicing their opinion, than keeping quiet and facing the inevitable.

In order to avoid a major split in probably the worst possible time, the only way out for the party is for a show of hands among the party’s parliamentary group to choose the most popular candidate. The Working Committee could lay the groundwork for such a showdown by nominating the probable candidates and then calling for a vote by the parliamentary group.

The issue for Wickremesinghe is that should anyone other than him, win the nomination and go on to win the presidential election, that individual, by virtue of the party constitution, will also become the party leader, which effectively means the end of the road for him.

Given what’s on the table, it’s highly advisable for Wickremesinghe to either bow out gracefully or if he wishes to continue in politics, to arrive at a compromise with the party’s nominee to continue in his current job, which is about the best thing going for him right now.

Wickremesinghe and the UNP can however find solace in the fact that the main Opposition camp is having their fair share of issues as well. With the imminent nomination of Gotabaya Rajapaksa as the Sri Lanka Podujana Peramuna (SLPP) candidate, the latest controversy now surrounds the manner in which Rajapaksa obtained his Sri Lankan citizenship.

The matter is now being investigated, following action initiated by two civil activists. We will have to wait and see.

So the scales are very much even as things stand between the UNP and SLPP and the only candidate, were he to contest, that stands to benefit from all this chaos, is the incumbent.

October 14, 2018 bythemorninglk No Comments
Late night meetings, discreet conversations and promises obtained from various parties amounted to nothing as the Joint Opposition (JO) was unable to come to an agreement over whether or not they....

May 19, 2019 bythemorninglk No Comments
Sri Lanka marks 10 years since the end of the brutal war this weekend, but the country is yet to fully recover.