The combat terrain is the mind 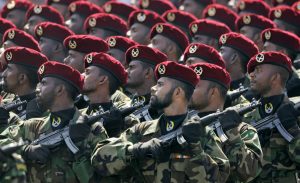 Brigadier Sumith Atapattu, the current Spokesperson for the Army, is a war veteran, presumably with some training in ideological warfare, as were some other Army spokespersons over the decades of the internal war.

When he makes a public pronouncement, years of professionalism kick in, and he chooses his words carefully and clearly talks with full confidence – as have most Army spokespersons I have listened to when reporting the internal war over nearly 40 years.

Last week, the Brigadier addressed a crucial audience: The business leadership of the tourism industry, probably the most crucial business sector in terms of the country’s external financial strength. After all, tourism brings far more added value than does the garments industry, the third major forex earner after migrant-worker earnings.

An important point Brigadier Atapattu made in that input to industry leaders was that the armed forces were well aware of the nature of the new “enemy” they now faced – its relative strengths, social configuration, and weaknesses. That, with their professional assessment, the forces are confident that they can defeat this menace to Sri Lankan society, was the gist of the Brigadier’s input.

Brigadier Atapattu, at 54 years of age, having served his Sinha Regiment in war and peace since 1988, simply but methodically outlined the Army’s perception of this latest enemy faced by the Sri Lankan state: “…we know them, we know the numbers, and we know the roots…”

The Army Spokesperson was not presenting his personal views but was articulating the assessment of the military high command. Not only is that assessment the result of systematic analysis but the presentation of it was also a carefully-formulated public communications projection.

Dealings with in the past

One huge advantage the Sri Lankan armed forces have is the decades of experience of dealing with not just one previous insurgency but no less than three. The largely ceremonial post-Independence armed forces (its heaviest field armour then comprised Saladin armoured cars if I recall rightly) initially only had to deal with civilian mobs in those early anti-Tamil pogroms of the 1950s.

The armed forces’ first head-on confrontation was with the first JVP insurgency launched in 1971. That the JVP’s first foray in armed struggle only lasted months was not merely a testimony to its own amateurishness but also, more importantly, to its inadequate social-rootedness.

However, as many analysts (at the time and later) pointed out, the first JVP insurgency was launched prematurely – that is, before the material and socio-political conditions were ripe for an attempt at toppling the existing State. Even if the JVP was rooted in a specific set of social constituencies – essentially the rural and semi-rural poor – the Government of the time included powerful left parties that also represented those same constituencies.

Furthermore, that Government had only recently come to power and those constituencies had not yet tired of their expectations of those governing parties. Hence, these same constituencies were not prepared to help overthrow the regime.

The sudden launch of the insurgency on 5 April 1971, while initially benefitting from the element of surprise, also resulted in the non-preparedness of the JVP’s social constituencies to support it. Furthermore, the emphasis on simply recruiting combatants and not waiting for extensive radicalisation of the older generations added to the distance between the insurgent movement and its social roots.

It was that distance from its social roots, combined with relatively weak military capacity that was the downfall of the 1971 insurgency.

As village elders and parents trooped to police stations to inform the authorities of what they perceived as the immature politics and irresponsible violence by their community’s youth, the first JVP insurgency collapsed within months. The inadequacy of its “underground” – i.e. the covert organisational infrastructure necessary to sustain covert rebellion – which, in turn, was embedded in a weak/vacillating social constituency, quickly made the insurgency unsustainable.

That early shock tactic of simultaneous attacks on police stations could not be sustained for long; especially when no popular political mobilisation was forthcoming due to their social constituencies’ divided loyalties between immature youth guerrillas and mature left parties already in power with promises to keep.

The second JVP-led insurgency of 1987-1990 was much stronger because the movement’s grip on its social constituencies was strong and the size of its social base much wider given the broad basis of political mobilisation. Unlike the narrow, socio-economic class, mobilisation of the 1971 uprising (based on purist peasant and worker mobilisation), the second JVP insurgency mobilised on an ethno-nationalist theme with a consequently broad constituency catchment.

The extensive social roots of the second insurgency gave it the strength to sustain the rebellion even in the face of far superior State forces which were well experienced by then in fighting another popular insurgency (the Tamil secessionist) from its birth to maturity. The JVP’s lack of the geo-physical hinterland available to the Tamil insurgents (in South India and later in the north Sri Lanka) was offset by the availability of its “social hinterland” in the form of its extensive social support base that sustained its underground fighting networks.

Crucially, even though at one stage there were two parallel powerful insurgencies in the North and South, they could not coalesce (as many leftists might have wished) because both rebellions were driven more by rival ethno-nationalisms rather than by common socio-economic roots (which there were). Otherwise, the Sri Lanka we have now would have been substantially different (for the worse, I suspect).

Prime Minister Ranasinghe Premadasa’s brilliant political tactic of adopting a similar anti-Indian intervention posture as that of the JVP also severely undermined the “patriotic” legitimacy of the rebellion.

Nevertheless, it took a lot of hard, painstaking (and ruthlessly brutal due to political timetables) intelligence work combined with the nitty-gritty of extensive search operations, surveillance, and tight installation security, over about four years before the second insurgency was defeated.

It was the ultra-nationalist regime of Mahinda Rajapaksa that chose to fend off such international pressures (including playing off China against India) to enable the Sri Lankan military to accomplish its assigned task of crushing the Tamil insurgency.

That it took over three decades is powerful testimony to the depth of the social roots of that insurgency.

That both the second JVP insurgency as well as the Tamil secessionist insurgency had extensive social roots meant that the State’s security and military agencies had to undertake extensive repressive measures against those social constituencies in order to weaken their support for the rebels. Thus, both in the North and South, the security/military agencies had to carry out unsavoury “strategic” operations that targeted the social constituencies in addition to targeting the elusive insurgents themselves.

The armed forces and Police cannot be solely blamed for this “dirty war”. The security agencies’ resort to such tactics was largely derived from the direction they got from the governments of the time where body counts and regaining of territory in the shortest possible time in order to meet electoral timetables were the priority as opposed to social conflict resolution.

This writer recalls that in the early 1980s, the Sri Lankan military had already advised the Government of the time that the Tamil secessionist insurgency could only be definitively defeated politically and not by purely military action. I believe that “political settlement” was the term used by the military of the time. It was the political class, for crude electoral purposes, that took the direction of using brute force and military triumph.

This correct “intelligence” was because the Sri Lankan military, like most other State militaries, were professional and undertake their duties with scientific rigour (most of the time). All their study of the insurgencies they faced at the time enabled them to arrive at realistic assessments of the nature of the threats they were expected to counter.

Today’s Sri Lankan military is, no doubt, keenly aware that their valiant defeat of the Tamil Eelamist war had only ended the armed hostilities but that the roots of the conflict – namely ethnic and economic grievances – remain unresolved.

Hence the military’s willingness to retain its current capacities of troop strength, weaponry, and territorial dominance. It knows too well that unless the ethno-national issues are settled, the aggrieved social constituencies remain for future anti-State mobilisation.

Just as much as Brigadier Atapattu pointed out in his presentation last week, the armed forces had already made a clinical assessment of the nature of the armed movement they face today. Helped by decades of experience, the security forces already identified the social roots of the NTJ/JMI terror campaign.

Indeed, the military’s confidence about their ability to handle this latest threat derives from its correct assessment of the narrowness of the social constituency from which this Islamist insurgency had arisen. As pointed out in previous columns, it is the stark lack of an extensive social constituency that seems to be a characteristic of the NTJ/JMI movement. It is clearly a micro-insurgency but with the advantages of technology and global networks.

This history of progressive articulation of grievances and dissent could be seen in the JVP insurgencies and also in the Tamil insurgency. It should be recalled that the majority of Tamil voters democratically opted for the Tamil separatist goal when they preponderantly voted for the secessionist election platform of the Tamil United Liberation Front (TULF) in the general elections of 1977. Thus, the Tamil secessionist movement already had its social-political constituencies on which it then based its subsequent militarist expression.

This is why the Northern Provincial Council today plays the crucial role of channelling Tamil ethno-nationalist frustration into institutional avenues rather than militarist ones. The more successful the North becomes economically and socially under the (somewhat tumultuous) NPC administration, the quicker Sri Lankan Tamils will get back to enjoying life rather than plotting rebellion.

In the case of the North, then, it seems to be the classic case of addressing social grievances in order to discourage rebellion. In the South, the JVP, now aware of the rigours of insurgency minus an effective geophysical hinterland, seems to have transformed into an effective oppositional political movement. The way Tilvin de Silva and his comrades seem to be broadening their social constituencies is also indicative that, for the JVP, while the goal of revolutionary transformation remains firm, its modus operandi has switched from armed struggle to the slower pace of electoral politics.

But the NTJ/JMI obviously do not have an extensive social constituency at all. The best indicator of this is the very rapid and wholesale exposure of their operational networks by the very ethno-religious community from which they emerged. And they do not have such social “roots” because they do have a history of political mobilisation of any constituency in terms of community grievances and interests.

In this sense, the NTJ/JMI is worse off than the 1971 JVP rebels. But what they do possess is the ideological motivation, motivational-communicational resources, and the international networking capacities that globalisation has brought?

In this sense, as some western experts have put it, the NTJ/JMI are not an “in”surgency but a “pan”surgency that transcends borders and social constituency interests and is driven more by the sheer power of extensively-communicated religious fervour and the narcissistic illusion that individual struggle and martyrdom can triumph.

As analysts of the Islamist pansurgency are increasingly beginning to realise that the counter to this pansurgency is in the terrain of the psyche and ideology, alongside the (equally important) conventional approaches of intelligence, surveillance, and careful handling of potential social constituencies.


Next week, I will explore the role of theology and historiography in countering micro-scale but geographically widespread religious terror.

The destiny of a nation in peril

December 9, 2018 bythemorninglk No Comments
The unprecedented one man show that has been going on for the last couple of weeks seems likely to continue while the courts deliberate on the legality of the President’s twin actions of dissolving Pa

December 29, 2019 bythemorninglk No Comments
With two more days to go for a brand new decade, it is appropriate that we reflect on what 2019 had in store for Sri Lanka.