The economics of reading – the Colombo International Book Fair 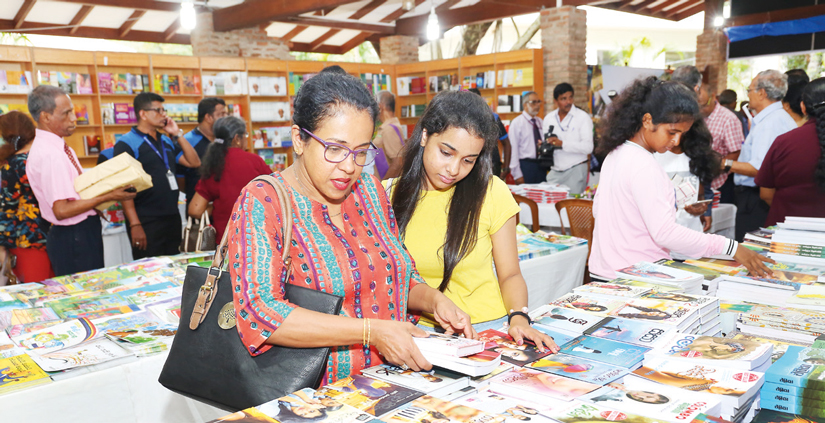 If you’re a book lover, you know that the local book fair season is now in full swing, with not one but two international book fairs taking place in and around the vicinity of Colombo this October.

Out of the two large-scale fairs that took/are taking place this October, the CIBF is the oldest and largest one in Sri Lanka, attracting hundreds and thousands of people from around the island and partnering with many local book publishers.

This year marked the 21st edition of the book fair since its initiation in 1999, and was organised by the Sri Lanka Book Publishers’ Association, a privately owned entity comprising Sri Lanka’s largest publishers.

According to Sri Lanka Book Publishers’ Association Secretary Upali Wanigasooriya, the first two fairs, during the years of 1999 and 2000, where held at the Colombo Art Gallery, with only 20 stakeholders and 2,000 attendees.

This year, CIBF lasted a total of 10 days, from 20 to 29 September, and showcased a wide range of diversity spanning from novels to educational textbooks, in all three major languages – Sinhala, Tamil, and English.

Wanigasooriya stated that each year, the publishers who take part in CIBF commit to offering a flat discount in order to make the books more affordable to the public. This year, all the participants honoured a flat discount of 20% on all their merchandise and some even gave additional discounts to their consumers.

He stated that tickets for the fair this year were priced at Rs. 20 per person, with children and clergy being exempt from this fee. He explained that the entrance fee gathered from the book fair is used to fund scholarships for medical as well as other university students.

He explained that despite the heavy rain and the tragic events of Easter Sunday, the turnout this year was similar to last year, with over a million people from across the island coming during the 10-day affair.

Wanigasooriya stated that BMICH, the venue used since 2001, cost over Rs. 30 million this year. However, despite this, the cost of the stalls remained the same for the past three years. He explained that the spaces sold are 10 ft. by 10 ft., with prices ranging from Rs. 140,000 to Rs. 250,000 depending on its location.

Vijitha Yapa Group General Manager Lakhman Siriwardhana stated that their stall this year cost them Rs. 1.7 million due to its size and central position.

Vijitha Yapa is one of CIBF’s oldest stakeholders, participating in the fair every year since its inauguration. Primarily an English book retailer, Vijitha Yapa brings down books from the UK and India, and houses its own local publications having printed over 500 titles to date.

Siriwardhana stated that taking into consideration the cost in preparing for CIBF each year, with stall, transport, and food costs, and bringing down merchandise, there is no real profit made by taking part in the fair. However, publishers take part to work towards the attainment of the common goal of increasing readership in the country and for the prestige that comes with participating in CIBF.

“Aiming for profit is not realistic; we have to pay for transport, stalls, books, and food for our employees, so once the book fair is over, we wouldn’t have made a big profit out of it.”

Siriwardhana explained that Vijitha Yapa begins preparations for the fair from May or June, depending on what books are in demand.

While honouring the 20% discount guideline this year, Vijitha Yapa took it a step further by allowing its managers to provide further discounts up to 25-30%.

Apart from CIBF, Siriwardhana stated that the group takes part in other book fairs around the world in cities such as Frankfurt, London, and Delhi. Sarasavi Bookshop is another major stakeholder in CBIF, having also taken part in it since the beginning.

According to Sarasavi Finance Manager Sarath Jayasighe, the bookstore begins preparations for the fair a month in advance, and focuses on showcasing books published by the company, imported books, and books from third-party authors, in both English and Sinhala languages.

Jayasighe shared Siriwardhana’s sentiments on the reasons behind participating in the book fair, i.e. it being a non-profit move on the company’s part, and stated that they are more focused on the goal of improving the country’s reading habits. He also stated that at this year’s fair, Sarasavi had five stalls in several of the book fairs’ halls.

To get an outside perceptive on CIBF, The Sunday Morning Business spoke with book enthusiast and Co-founder of Book Swap Colombo Nadeesha Paulis.

Paulis stated that in an age where people are losing enthusiasm for reading and writing, perhaps because of digitalisation or social media, CIBF is a good opportunity to rekindle people’s passion people for reading.

She went on to state that the discounted rates at the fair make it more affordable for people to buy these books.

“The fair has a diverse range of books, encouraging people to explore other genres and cultures. I think this is great because people who branch out and read these books, especially ones from other cultures, learn a lot.”

She also pointed out that offering books in all three major languages is advantageous as a majority of Sri Lankan readers are proficient in Sinhala and Tamil.

CIBF has gained in popularity in the last couple of decades, so much so that people now mark their calendars for the event each year. Its growing number of participants and attendees stands as a testament to its ability to reignite the passion for both reading and learning in Sri Lankans.

March 8, 2020 bythemorninglk No Comments
Considering the impact of the coronavirus on Sri Lanka’s raw material imports, the Export Development Board has formally requested the President to provide a stimulus package.