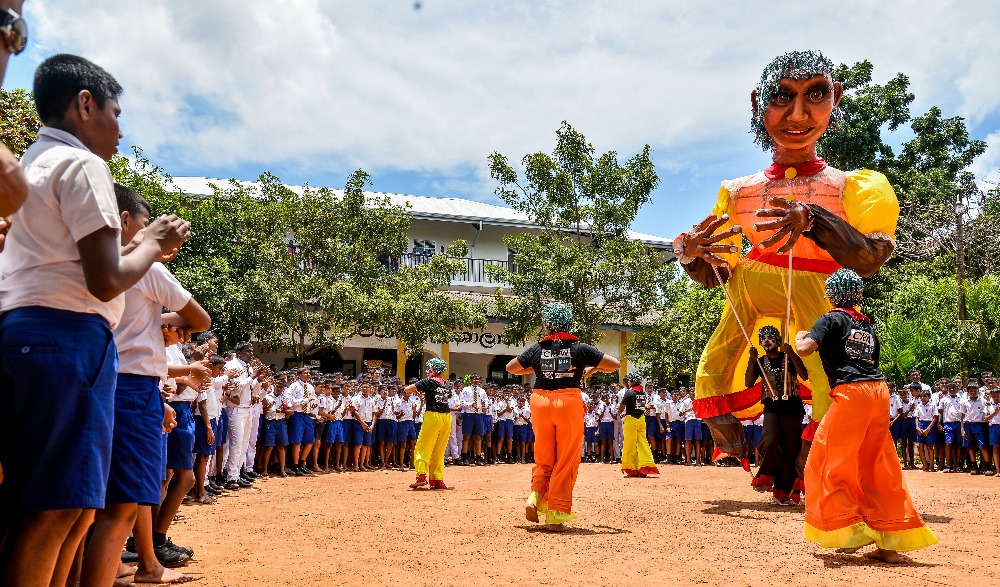 Gender-Based Violence (GBV) is an important issue that just doesn’t get enough attention.

December 2017 saw Sri Lanka host its own edition of the UK Southbank Centre’s Women of the World (WOW) Festival. WOW Colombo celebrated and empowered women from all over Sri Lanka, while highlighting the struggles women and girls face daily, and providing inspiration and tools to make change.

This programme took place under the platform “Voices and Choices”, with eight change agents being seed-funded to implement their proposals. The Sunday Morning Brunch spoke to three of these change agents about their projects, and how they are driving change and fighting for women and girls. 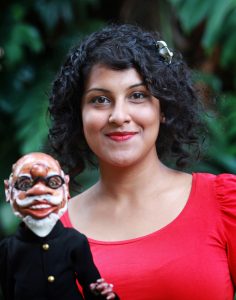 “I looked at the root cause of why we feel gender roles have to subsist, why we still shame our boys and girls using gender, and why still don’t allow boys to express vulnerable emotion, or girls to follow their passion” Power of Play Founder and Artistic Director Sulochana Dissanayake

Conceptualised by performance art company Power of Play, “Why? Saama” is a play about a little Sri Lankan girl who refuses to adhere to gender stereotypes.

Power of Play Founder and Artistic Director Sulochana Dissanayake explained the process of “Why? Saama” began when she collaborated with Swedish artist Felix Norgren and the Merrill J. Fernando Charitable Foundation on building a giant puppet – the first of its kind to be built in Sri Lanka.

Having been involved with WOW Colombo – and with this collaboration taking place against the backdrop of Sri Lanka’s 2019 provincial elections, where Dissanayake had noticed female councillors being subjected to a lot of intimidation and hate speech – she realised there was only one character that this giant puppet could be. It had to be a girl, and she had to convey the message that every girl can be a giant if raised to be so.

“I looked at the root cause of why we feel gender roles have to subsist, why we still shame our boys and girls using gender, and why still don’t allow boys to express vulnerable emotion, or girls to follow their passion,” Dissanayake said. “My mentor, psychologist Seema Omar, once talked about roots and wings, and how to truly prosper, you need both. You need roots tying you to your community, and wings to be adventurous and take risks. Traditionally, we focus on wings for boys and roots for girls, but now we know both of those approaches are wrong.”

Dissanayake applied to the Voices and Choices grant scheme with the idea of teaching gender equality to children through puppetry. With the giant puppet complete, Dissanayake then set out to gain Ministry approval for “Why? Saama” to perform in schools – a task much easier said than done. After much shuffling from pillar to post, Dissanayake found herself (then heavily pregnant) being summarily dismissed by the Western Province Education Department because she was wearing a knee-length skirt and the Director “doesn’t like knees showing”. A social media post on the injustice of the matter led to Dissanayake being approached by schools individually to perform “Why? Saama” to their students. “Why? Saama” was then also eventually approved by the Ministry of Education, giving it acceptance at a national level.

“Why? Saama” takes place as a table-top puppet performance, following a day in the life of Saama, a little girl from a normal family. Throughout the performance, stereotypical questions on gender are cleverly intertwined and addressed, with Saama questioning stereotypes and looking to the audience for their views, creating a safe, inclusive space for children to enjoy, learn, and engage in the presence of their teachers.

Symbolically, once Saama overcomes the fears ingrained into her by society and gender roles, she grows, becoming larger and transforming from a table-top puppet into the 14-foot tall giant puppet, showing the powerful visual of a little girl towering over everyone else by overcoming her fears and defying stereotypes.

To date, “Why? Saama” has engaged with 8,870 students and teachers across the country. In 2019, “Why? Saama” entered the State Children’s Drama Festival winning second place in the “Best Play of the Year” category, and winning the awards for Best Stage Management, Best Costumes, Best Music Composition, and Special Jury Award for Best Choreography

The Language We Speak 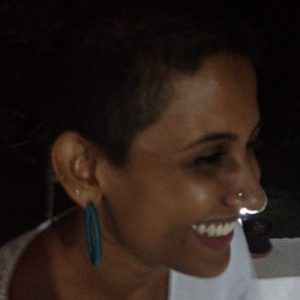 “It was a very positive experience where participants could come up with interesting areas. Our main information is very centred around Colombo, but now we have people writing from Jaffna, Vavuniya, Ratnapura, and so on, who can produce localised content and Bakamoono worked as an amplifier for their voices” The Grassrooted Trust Director Paba Deshapirya

The Grassrooted Trust is no stranger to GBV. Their website platform Bakamoono aims to educate and build awareness on GBV, intimate partner violence, and sexual violence. The Grassrooted Trust Director and sexual, reproductive health, and gender specialist Paba Deshapriya shared that the Voices and Choices grant scheme allowed Bakamoono to grow their creative writing content as a young platform.

“We focused on creating content in Sinhala and Tamil, because information on these topics is available in English already. But our local languages have a real dearth of information,” Deshapriya said, explaining that “The Language We Speak” saw the training of 32 people in content creation in Sinhala and Tamil.

Taking place from May 2018 to March 2019, Deshapriya held an open call for content creators, and after careful interviews and testing, selected writers and videographers who had a wide-based approach to essential topics like sexual and reproductive health, virginity, and menstruation, in order to gauge their understanding and approach to these matters, before training them on topics like gender identity, HIV, creative writing, and investigative journalism.

“Participants exceeded our expectations by providing great content,” Deshapriya said. “It made us realise that you just need to find the right people and build the right capacity. The project ended in 2018, but we still have some of this group with us, writing.”

For Deshapriya, the immediate outcome of “The Language We Speak” was that the group was able to provide content in the local languages, while also having a group of young people who are understanding of these concepts, and are open-minded. One writer, Deshapriya noted, works for the Sri Lanka Guardian, and has also used the Sri Lanka Guardian as a platform to speak about issues like transgender and LGBTQ+ rights.

“It was a very positive experience where participants could come up with interesting areas. Our main information is very centred around Colombo, but now we have people writing from Jaffna, Vavuniya, Ratnapura, and so on, who can produce localised content and Bakamoono worked as an amplifier for their voices,” Deshapirya said, adding, “Every story is newsworthy, and every story should be heard, so it was very refreshing for me to see local content on Bakamoono.”

The content created by “The Language We Speak” has reached an audience of over 313,800. The project also built the capacity of a group of 10 female writers from Kurunegala, with an increased understanding of gender, sexuality, and violence, who are running a bi-monthly magazine to educate rural women. Their magazine “Athwela” will be on Bakamoono for a wider reach.

The Power of Song

Ashanthi de Alwis is a household name. The singer, who curated music for WOW Colombo in 2017, applied for Voices and Choices because she felt there were certain causes concerning women and girls that could be campaigned through creativity, music, and entertainment.

“It created a calling for me to delve further into areas I hadn’t looked at before but that I knew I needed to be championing as an artist – issues that affect youth mentality and how they think,” said de Alwis. “We have a great responsibility when it comes to our youths, to show them the kind of direction they can take with issues like depression, mental health, and GBV. These are issues our youths are not exposed to in a contemporary manner.” 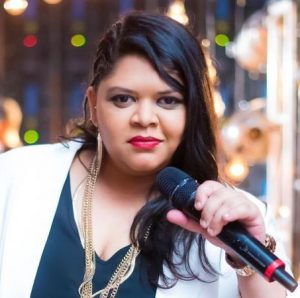 Through Voices and Choices, de Alwis first worked on a song that focused on suicide prevention and raising awareness about depression. A strategic partnership with Mobitel, and a collaboration with Sri Lankan musicians Randhir Witana and Manasick, added extra weight to the project. Working with Leo Burnett on public relations (PR), de Alwis launched “Hitha Danne Mithuranne” on World Suicide Prevention Day 2018.

“The song creates a space for kids and youths to talk about their problems and create conversations. Mobitel also created a special social media campaign on suicide prevention and depression, what it is, how conversations about it can help, and how, if you need to speak about it, psychologists and counselling can help,” de Alwis said.

The proceeds of “Hitha Danne Mithuranne”, over Mobitel downloads, raised over Rs. 1 million, which was donated to a suicide prevention hotline to enhance their infrastructure and services. The success of “Hitha Danne Mithuranne” led to a second phase and a second grant, which de Alwis used to compose the song “Rajiniye”, with a special music video focusing on the harassment that Sri Lankan women face in public transport and at work.

“Rajiniye” focused on bystander intervention, and how it can help prevent situations and open the public’s eyes to what women experience. “Sometimes, we’re socially incapable of dealing with these situations and we tend to run away from them, because we don’t know what to do,” said de Alwis. “‘Rajiniye’ explores the psychology behind that, and gives people an idea on how to handle these situations, as a victim and as a bystander. It also shows how men can support women and help them by calling this out.”

In the long term, de Alwis shared that she hopes to do more music on social causes and dive further into GBV in her work, explaining that music is a powerful tool to drive behavioural change. “If we can stop one person, or change the mindset of one person on GBV, or help one person realise that their life is worth something and prevent a suicide from taking place, then that is a huge victory.”

Dealing with GBV and gender bias is very much a long game, and one that must be played on a variety of fronts, from social attitudes, to educational reform, to freedom of information. Change, though constant, cannot happen overnight, and these remarkable women are helping move this change along through innovations that inform the next generation, and in so doing, building the base for a new, more equal world.

November 13, 2018 byJennifer Anandanayagam No Comments
It was all about classic design mastery when the Classic Car Club of Ceylon partnered with SML Frontier Automotive (Pvt) Ltd, Hatton National Bank and Top Gear Sri Lanka for the fourth edition of the