January 7, 2020 by The Sunday Morning No Comments 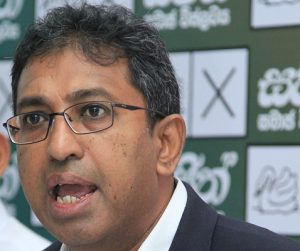 There was a heated debate in parliament this evening regarding an article that was published in The Sunday Morning on Sunday (5) about the fuel price formula (http://www.themorning.lk/biz-pg-1-1-fuel-formula-u-turn/).

UNF MP Harsha De Silva, former Minister of Economic Reforms and Public Distribution, inquired from the government about a statement made by Secretary to the Treasury on continuing with the fuel price formula that was initiated by the previous UNF government.

Governing party MP Namal Rajapaksa, who spoke earlier in the parliamentary debate on the President’s policy statement, accused the previous UNF government of failing to provide relief to the people and accused the former administration of misleading the public.

However, MP De Silva in his speech refuting Rajapaksa’s comments said that the incumbent government was also continuing with some of the policies put in place by the former government.

He pointed to the government’s plan to continue with the fuel price formula as an example.

At this point Rajapaksa denied saying the government has not made any decision to continue with the UNF government’s fuel price formula.

De Silva pointed out that the story quotes the Secretary to the Finance Ministry, who is also Secretary to the Treasury and whether the government party members were denying a statement made by the senior state official.

Following is the link to the original article;

May 14, 2020 byTSM Web Desk No Comments
Two minors, who had allegedly attended lectures on the use of firearms and the propaganda of extremist ideas,
conducted by the National Thowheed Jamath (NTJ) and its Leader Zahran Hashim, recorded sta

Alternative sources of financing in place to repay foreign loans