The truth about Halal 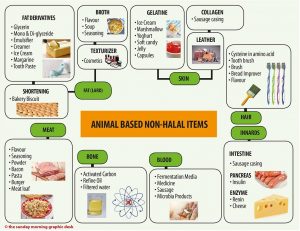 We are at a juncture in civilisation where the origins of every item we consume needs to be traceable, especially when it comes to food. Do the vegetables come from a farm that adapts organic methods of cultivation? Are the additives in your food safe for consumption? Are the items that are sold at a cheaper price in any way contaminated or reaching expiry?

To ensure all the ingredients that are in your food items are safe for consumption and to assure that the foods are packed and prepared in hygienic conditions; suppliers obtain food accreditation and quality standards for their processes.

The Halal Accreditation Council (HAC) in Sri Lanka revealed that revenue of $ 1.6 billion is generated per year to the country by exporting goods that are Halal accredited. At present, there are about 230 companies that are accredited by the HAC, out of which 65% of the companies produce food and beverage products to the local and international markets.

Among many food accreditations, the Halal accreditation has come under severe criticism by hardliners, raising concerns that the fee that is received by the council is channelled to fund global terrorism. The word Halal in Arabic means “permissible”. What many do not understand is that while it has religious implications, it is also an accepted accreditation that holds global significance.

The Sunday Morning contacted HAC Sri Lanka to clarify the matters and to understand the global significance of the Halal accreditation and how it is revolutionising the global food industry and export market for Sri Lanka.

“Today, 70% of Muslims are in the age group of 30-35 years and most of them are travelling for leisure and work. Wherever they travel, they would want to patronise a restaurant that offers Halal-certified food. The other aspect of the certification binds with tariff and trade barriers. For instance, if we are to export goods to a Muslim country, our products need to be certified Halal.”

In the recent years, countries such as Japan and Korea too have adopted the Halal certification for their food and beverages, as they have experienced a surge of Muslim travellers.

“Muslims are big on food consumption and wherever they travel, they would want to go and try out the food in those countries. If the tourism industry does not have sufficient eateries that are Halal certified, chances are that they would stick to eating food from a Muslim establishment, which would naturally skew the revenue distribution for eateries,” Fatharally elaborated.

As he pointed out, the Halal accreditation that we see in international fast food chains pretty much explains the requirement of obtaining that certificate.

The HAC is governed by a system known as ISO 17065 conforms assessment that are required for accreditation bodies that certify products, processes, and services. Furthermore, the HAC is also a member of the World Halal Food Council which includes approximately 130 member associations from Asia, Australia-New Zealand, America-Latin America, Europe, and Africa that issue Halal certifications in their respective regions.

“A member of the World Halal Food Council receives a reciprocal certificate that allows us to export Halal-accredited products from Sri Lanka to any country that requests the certification. If we are exporting Halal-accredited products to Malaysia, our processes need to match with Malaysia’s imports regulations and Halal certification standards,” HAC Sri Lanka Head of Branding and Business Development Aakif Wahab informed.

Wahab noted that there are eight aspects that are not considered as Halal which when taken in a food grading manner and not a religious stance can benefit all human beings.

In a business sense, even the animals that die in the above circumstances bear a cost. HAC Sri Lanka stated that though a freshly slaughtered animal and an animal that had died due to other causes would not be any different, the company should not include that meat along with the other meat.

“Animals that die due to diseases can carry toxins which can cause serious health implications if consumed. But the reality is that some companies do sell this type of meat which can possibly be contaminated,” Wahab explained.

There are regulatory requirements and prerequisites that are followed during a production of certain foods and beverages. Some flavour enhancers and colouring agents added during food processing can be toxic for human consumption. According to Wahab, there have been many instances where manufacturers have used such additives that are dangerous for consumption.

Hair, bone, blood, and skin of the pig are used in at least 185 products that a person uses on a daily basis. From your toothbrush to your soap to your water filter, by-products from the pig are used. Charred pig bones are commonly used as activated carbon in filtering water.

“Many questions as to why water needs to have a Halal certification have been raised, and it is to ensure that the water filtration process does not include any activated carbon derived from pig bone. Many international airlines request that the water they take on board is Halal certified.”

Cochineal/carmine insect is used to produce red dye which is scientifically identified as E120.

Amino acids are extracted from human hair and it is commonly used in the bakery industry as a bread softener. It also provides a savoury taste to baked goods.

Apart from that, an enzyme is extracted from the human placenta which is used in anti-ageing products such as creams and pills. In some countries, they secure the human placenta and sell it to the cosmetic and pharmaceutical industry to be used in such products.

Source of materials: Any of the ingredients that are used in food processing can come from an animal, plant, microbial, chemical, or mineral. If HAC Sri Lanka is to certify a product, it is certain to verify all ingredients used in the manufacture of the products. “If you take biscuit manufactures, they use 10 – 15 ingredients as opposed to 5 to 6 ingredients used at home. Such ingredients which include fat, preservatives, flavours, colouring, to name a few, which can be derived from sources not in conformity with the Halal Standard,” Wahab informed.

Processing methods technologies: In a cottage industry, due to the small scale of the batches of products, the method of processing can be traditional. A traditional curd manufacturer will use the previous batch of curd to catalyse the fresh batch of curd and let it process naturally. But, in large-scale food productions, the enzyme that is used can come from different sources.

Enzymes are popularly used in cheese manufacturing. The common question posed is – if cheese is made of milk, why should it have a Halal accreditation? The renin enzyme comes from an animal’s gut, and we need to be aware of which animal’s gut and what process was followed during enzyme extraction.

Food adulteration: The most common scare, though not proven, was the incident of food adulteration in Milk Powder to contain animal Fat. Take for example pure bees honey, in efforts to drop the cost of the product, there is a possibility that it can be illegally diluted with syrups made from corn, rice and beet or adulterated spice powder, being mixed with coloured wheat flour. Such practices are not allowed in Halal certification.

Cleanliness and cross contamination: Purity is another factor that is considered in Islam which in Arabic reads “thayyib”. This is also a crucial aspect that is considered for Halal certification. “We also take into account that the food is prepared in a clean and hygienic environment. For instance, employees that are involved in food processing operations should practise strict personal hygiene. They should cut their fingernails, wear gloves, and caps/hairnets. Then, when it comes to storage facilities for the ingredients, they should comply with industry standards and adopt clean food preparation practices.”

Wrapping up our conversation, Wahab and Fatharally reiterated that should Sri Lanka at any point decide that the Halal certification is unnecessary, it will not impact the Muslims but the economy of Sri Lanka as trade opportunities that are now active with over 130 countries would be barred. They also informed that at least 65% of the companies that are registered with them are non-Muslim owned business, which are high export revenue generators for Sri Lanka.

We contacted the Export Development Board Director Export Agriculture Malani Baddegamage to gauge the importance of Halal-accredited foods that are exported.

June 17, 2019 bythemorninglk No Comments
Land in the Kallaru Forest Reserve adjacent to the Wilpattu National Park was earmarked for development purposes and work has already commenced, while a writ petition filed by a local organization.

April 26, 2019 bythemorninglk No Comments
While the week was to be spent on activities scheduled at auspicious times, the Anuradhapura Methodist Centre was surrounded by fearmongers who were on a mission to disrupt the peaceful prayer meeting