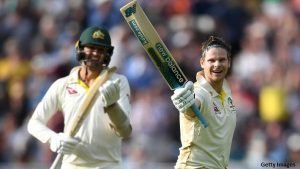 Intriguingly, the debate has arrived at a very neat point of Smith’s Test career, in terms of splitting his terms as captain and not captain in two. As of the end of the Oval Test, the final match of a series in which Smith was the clear difference between Australia retaining the Ashes and failing to do so, he had played 34 matches as captain of the national team, and 34 as just another member of the XI.

Asked in Perth on Wednesday evening whether or not the “pressure” of returning to captaincy would have a negative impact on his batting – his exploits in England aside, more recently he also has strong displays in the Twenty20 series against Sri Lanka and Pakistan – Smith recalled his own statistical split, with a fair degree of accuracy.

“I actually think I play better with pressure, that extra pressure when the team needs something more and things like that,” Smith said in Perth. “My record probably is better when I’m captain than when I’m not. That sort of pressure doesn’t really bother me. But I’m not thinking about captaincy or anything at this point in time. I’m really comfortable where I’m at and I’m enjoying what I’m doing.”

As for a quick fact-check on Smith’s recall, yes, he is quite right. In 34 Tests as a player, Smith has averaged 59.17 while scoring 3314 runs and compiling 11 centuries. Impressive as that may sound, it is dwarfed by his returns in 34 Tests as captain: 3659 runs at 70.36, with 15 centuries. The argument for leadership detracting from Smith’s batting does, in this light, look somewhat hollow.

But, as ever, there are more nuanced ways to look at things. There are numerous phases Smith’s Test career can be grouped into, both as captain and as a player. The first, from mid-2010 until January 2011, saw the youthful, precocious Smith’s first five Tests, a period in which he is universally regarded as having struggled to cope with Test cricket before he was quite ready for it. An unclear commission, as neither fully fledged batsman nor specialist spin bowler, did not help as he tallied 259 runs and zero hundreds at a tick over 28.

Phase two began in early 2013 on an Indian tour Australia lost 4-0. Here, Smith demonstrated that he had developed considerably as a batsman, but it took a little while for his talents to be seen in full, as he grappled with overseas conditions, experienced bowlers and his own self doubts about gaining a secure place in the national team. Over this period, running up until late 2014, his returns grew steadily, ultimately tallying 1490 runs in 18 matches at 51.37 with five centuries.

It was at this point that Cricket Australia, requiring a new leader after Michael Clarke was invalided out of the 2014-15 India home Test series with hamstring and back problems, chose to elevate Smith to captaincy rather than handing the role to a more experienced temporary captain such as Brad Haddin. Smith, surrounded by a strong group of senior players and operating in home conditions, bloomed into the first truly prolific series of his career: 555 runs in three Tests as captain after having made a century in the first as a batsman alone, with three further hundreds at an average of 92.50.

At summer’s end, the switch was made back to Clarke in time for the latter stages of the 2015 World Cup, and he would go on to lead the Australians on a dual Test tour of the West Indies and England. Smith, returning to the ranks, churned out 791 runs in seven matches, tallying three centuries – including scores of 215 and 199 – and averaging 71.90, a handsome return if somewhat diminished by a critical run of low scores in the pivotal Birmingham and Nottingham Tests against England that saw the Ashes lost.

Clarke’s retirement returned Smith to captaincy, this time as the full-fledged leader for the biggest single continuous chunk of matches in his career, lasting from late 2015 until March 2018 and the Newlands scandal. A far bigger sample size, in which Smith was able to compile 3104 runs over 46 completed innings with 12 centuries, meaning an average of 67.47.

It was not a period without troughs. Series against Sri Lanka and South Africa in 2016 were notable for reduced output, as were tours of Bangladesh in 2017 and finally South Africa in 2018. The longer Smith’s captaincy went on, the harder it appeared for him to maintain the level he had established earlier on, and a notable feature of 2017-18 was how he clearly dialled down his scoring rate in order to mitigate risk and stay at the crease.

Nonetheless, those numbers created considerable doubt in the minds of many as to what exactly Smith would do when he returned to Test cricket in England this year as a batsman alone. The outcome, of course, was a glut of runs from a visibly refreshed and hungry player, in some of the most difficult batting conditions of his career, split up by a serious blow to the head from Jofra Archer at Lord’s that cost him the Headingley Test due to concussion. His return effort, a double-century at Old Trafford as the urn was retained by a team led by Tim Paine, will live long in the memory. So too will 774 runs from four matches at 110.57.

One thing that brings a fairer split to the captain versus non-captain records for Smith is to eliminate his first five, formative Test matches, to count only those in which he was clearly playing as a batsman alone. That brings his non-captaincy average up to 65 from 47 innings, as opposed to 70.36 from 52 completed innings as captain – a far less yawning gap that can be closed further should the counter begin at the time of the 2013 Perth Test against England, the moment Smith himself has reckoned to be the day he first felt at home as a Test batsman.

But perhaps the most telling way to look at Smith as a captain and non-captain is to examine his trends. As a captain, Smith had the advantage of starting near to the peak of his batting powers in late 2014, meaning his average as a leader was 80.50 at the end of his first Test as captain, then 92.50 at the conclusion of his first series. Over time, with a few exceptions, that average has gradually dipped – as of the end of the fateful 2018 trip to South Africa, not sitting above 80 since the 2016 Sri Lanka tour. A fabulous start with a gradual trend downwards.

Out of the 22 Test series in which Smith has played, he has averaged better than 45 in 12 of them. Of the 10 others, six are clustered amid Smith’s first seven series as a batsman, between 2010 and 2014. But the other four sit close together among his final six series as Test captain, from 2016 to 2018. The longer Smith’s captaincy went on, the more frequent his struggles became.

As a batsman only, though, we may in fact be yet to see exactly how much Smith is capable of. By starting so modestly, he gave himself plenty of upside, and with each passing opportunity to “just bat” he has delivered more and more to whoever happens to be fortunate enough to captain Smith at the time. Paine has been the most recent beneficiary, as Smith’s non-captaincy average surged up towards 60 even when including those first five Tests.

So, in conclusion, there is plenty of evidence to suggest that as a Test captain, Smith has a superior batting record that will be hard to improve upon. However as a Test batsman alone, there is ample reason to expect that he has the capacity to keep trending up for some time to come. A law of increasing, rather than diminishing, returns is what Australia’s Test team will need most.espncricinfo

November 1, 2018 byRevatha No Comments
David Peever has quit as Cricket Australia (CA) chairman in unprecedented fashion only a week after being re-elected for a further three years.