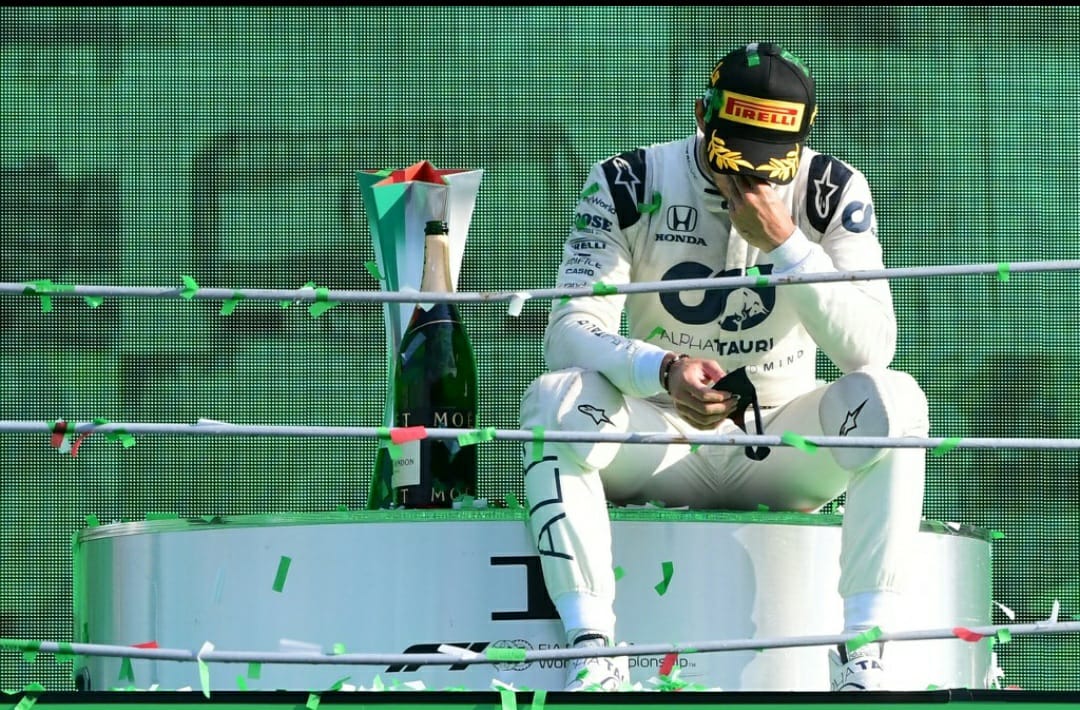 The world of F1 : Pure mayhem at Monza

One of my biggest regrets I’ll never live off is not being able to be at Playtrix Colombo or even with my friends while I watched this race. What started off as a smooth ride with only a standard level of excitement flipped an entire 360 to a point where I was on my feet, filled with emotions, screaming at the tele during all 53 laps!

Man! What. A. Race! But then again, what else were we expecting from the devil straights at Monza?

Monza held the most dramatic and unforgettable race of the year, producing incident after incident, from red flags to 10s penalties, from safety cars to a full race restart! Last Sunday (6) we witnessed an epic battle between racers from AlphaTauri, Racing Point, McLaren, and Mercedes, fighting their way into first. There were so many events that unfolded at Monza, so let’s take it point by point.

The basics of the Grand Prix are that they are segmented into three parts extending from Friday through to Sunday. Friday labels “practise” for drivers to experiment with the track, get their bearings, and to solidify strategies. Saturday is set out for “qualifying”, in which drivers battle it out on the track to get better timings than their mates in order to cement their position for the upcoming race. Basically, the further in front you are, the better. Then, of course, comes Sunday, race day!

Last Saturday at the qualifiers, the top 10 were landed by Lewis Hamilton from Mercedes at P1, followed by his partner at P2, Valtteri Bottas. This didn’t come as a shock to any fans on Saturday, due to their never-ending dominance. Nowadays, it’s almost as if when both drivers from Merc make it through turn one, the race is over.

What did come as surprise however was when Carlos Sainz Jr. from McLaren landed P3 and Sergio Perez from Racing Point landed P4, which positioned Max Verstappen from Red Bull at a very unlikely position of P5. P6 onwards was taken by Lando Norris from McLaren, Daniel Ricciardo from Renault, Lance Stroll from Racing Point, Alexander Albon from Red Bull, and finally Pierre Gasly from AlphaTauri.

And before you even know it, it’s race day. Lights out!

It wasn’t breaking news to anyone when Sebastian Vettel, starting off at P17, started having issues with his brakes, specifically with his right-rear brake disc, and had to slowly be taken to the pits. Since the new changes the team principal at Ferrari brought rolled out for the engine and car this year, we have seen their downfall at the tracks – the worst on straights, which, unfortunately, is all that Monza is.

It never looked good for Haas from the start, from where they started at P15 and P16. But in the middle of the race, on the 19th lap, Kevin Magnussen’s car started slowing down to an ultimate stop right out on the track! Thankfully, the halt occurred close to a service road nearby which allowed the car to be pushed off the track. But this incident is what changed the entirety of the race and paved the way for all the bombshells that followed.

The end to the Mercedes dominance

Immediately after Magnussen’s stop, we saw Lewis Hamilton and Antonio Giovinazzi enter the pitting lane. But since Magnussen’s car stopped so close to the pits, what they had not noticed was that the light boxes were showing red crosses notifying that the pit lane was closed for all drivers.

This incident went ahead to cost both Ham and Gio a full 10s penalty, positioning them at the very end of the race. To anyone who is not a Merc fan, most were giddy after the incident with the thought of a podium that wasn’t packed with both Merc drivers. With Red Bull also doing poorly during the race, this race was now wide open. Now, this was a battle for the mid-fielders!

I can’t explain this crash through simple terminology, but I think I speak for everyone around the world when I say that when Charles Leclerc crashed, it was bad. For a moment we weren’t worried about the stats, but rather about Leclerc. Ferrari fans couldn’t have had high hopes for Monza, but when that red car slid onto the tyre barriers, we all joined in being worried, not for the race or championship, still suffering with the memory of Anthoine Hubert’s passing, now for his friend Leclerc’s wellbeing. But it didn’t take long for him to get out of the car and confirm that he is sore but doing fine. This crash put the only remaining Ferrari car out of the competition as predicted and prompted a red flag, which allowed all the cars to retreat to the pit lane – this time, not breaking any of the rules.

Along with Ham having to serve his penalty and the red flag, it was almost historic to see the standing charts change in the flicker of an eye and to see Stroll from Racing Point leading the race, with Gasly and Raikkonen at P2 and P3. To see this new lineup on the charts was both a shock and a breath of fresh air to most that saw it.

Into lap 28, away we went again with the session restarting, racers battling out a close fight to the top. It didn’t take long for Verstappen to retire his car with Albon also in P14. Red Bull, Mercedes, and Ferrari were all out of the race, and it just got exciting.

What followed was just unprecedented racing that F1 fans hadn’t seen in a while. Post Covid-19, this is just what we all needed to lift our spirits and prove that not cancelling the season this year was the right move!

Sainz puts up a fight

Following the new lineup, even though this left Sainz further behind from his initial position at P2, this didn’t mean he gave up the fight! Passing Raikkonen, Sainz quickly reassured his position as the second, now threatening Gasly for first, and you could just see it in the way he drove – Sainz wasn’t here to play. He was here to win the Italian GP!

To absolutely no one’s surprise, Hamilton – almost flying – caught up eight full seconds with his Merc shooting up from P16 to P7, proving to everyone that it’s never just the car, but the driver that makes a difference.

But amidst it all, Gasly still led the Italian GP, more confident than ever, with Sainz and Stroll gaining behind him. I would be lying if I said it wasn’t a close call until the very last second to see if Sainz would beat Gasly because he was pushing that McLaren to its limits, completely wearing out its tyres, and Gasly was doing the most beautiful job, being patient with his position and blocking Sainz at every turn.

Finally, Sainz, encountering a slipstream, still couldn’t get close enough into the first sector and Gasly steadily yet rapidly made it through the white and black, being the most recent French racer to win the Grand Prix in 24 years!

Gasly couldn’t contain his happiness and neither could his AlphaTauri team. The win mirrored Vettel’s win in the past, setting out a great path for Gasly and his career in F1. It was an emotional win to everyone on the tracks, and everyone behind a screen. Personally, I was in tears! Gasly’s story of perseverance is one for the books!

Gasly commented on his win later, saying: “It’s been crazy! Emmanuel Macron just called me! I need to call him back!”

Other news in F1

In other news, the Italian GP was the end of a journey for the Williams family, specifically Claire Williams, as they stepped aside making way for Dorilton, the new owners.

When is the next race, you ask?

Today! Today is the day for the Pirelli Gran Premio Della Toscana Ferrari race in Italy! Can we hope for this race to top Monza? We never know. Watch out!

September 9, 2019 byPavani Jayasinghe Munagamage No Comments
Ryan de Mel is a 24-year-old artist who is a member of one the most popular bands in Sri Lanka – Voice Print. Ryan is a driven individual who works hard despite many obstacles to reach new heights in

November 5, 2019 byPavani Jayasinghe Munagamage No Comments
If you haven’t already seen or heard of him, you must immediately go to his Instagram and check out his posts (read all the captions too!) His name is Sharan Velauthan and he is currently studying a M