‘There will be obliteration’: Trump says he doesn’t want war with Iran 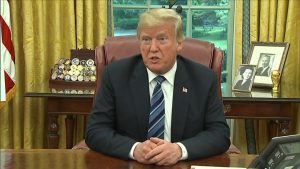 US President Donald Trump doesn’t want war with Iran, but if it happens, there will be “obliteration like you’ve never seen before,” he told NBC, adding that there are “no pre-conditions” for negotiations with Tehran.

“You can’t have nuclear weapons,” Trump said, implying anything else was open to discussion – and if Tehran doesn’t want to talk, “you can live in a shattered economy for a long time to come.” The statements come after Trump said he had cancelled a Thursday night strike on Iran at the last minute in retaliation for the American spy drone shot down over Iranian airspace.

In remarks to NBC’s Meet the Press, scheduled to air on Sunday, the president stressed that learning that “150 Iranians” would be killed if he called for the prepared airstrikes made him think twice, realizing that the deaths would not be “proportionate” to the loss of a single unmanned surveillance vehicle. While planes were not yet in the air, the operation was nearly at the point of no return, he said.

The drone’s demise has set off a number of responses from the US. The Federal Aviation Administration banned all American civil aircraft from flying over Iranian airspace above the Strait of Hormuz and the Gulf of Oman on Thursday, claiming “numerous” planes had been in the area when the surveillance craft was shot down. On Friday, Iraqi military sources reported US contractors were preparing to evacuate Balad Air Base, north of Baghdad, where about 400 Americans currently provide security, training and other basic services for the Iraqi military.

Unlike in previous “attacks” blamed on Tehran, like the mysterious assault on two Japanese-linked oil tankers in the Gulf of Oman earlier this month, Iran immediately claimed responsibility for the downing of the drone, claiming it had been repeatedly warned against entering Iranian airspace and its presence – operating in “stealth mode” – was a violation of international law.

Tensions have been escalating between the US and Iran ever since Trump pulled out of the multilateral nuclear deal in May 2018 and re-imposed sanctions, despite Tehran holding up its end of the bargain.

The atmosphere of hostility mounted as Trump removed the sanctions waivers that had allowed a handful of countries to continue buying Iranian oil. The “maximum pressure campaign” supposedly designed to drive Tehran to the negotiating table has so far proven little more than a guarantee of bad faith on the part of the US. Iran has condemned the sanctions as “economic terrorism” and demanded they be eased as a prelude to any negotiations. RT

November 8, 2018 byMalik No Comments
US Attorney General Jeff Sessions has been fired by President Donald Trump.

November 7, 2018 byMalik No Comments
The US Democrats have taken control of the House of Representatives in the mid-term elections, dealing a serious blow to President Donald Trump.