Theresa May officially steps down as Tory leader 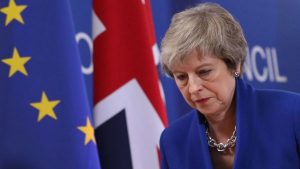 Theresa May has officially stepped down as the leader of the Conservative Party, but will remain as prime minister until her successor is chosen.

She has handed in her private resignation letter to the backbench 1922 Committee, two weeks after announcing her intention to leave.

Eleven Conservative MPs are vying to replace her as party leader and, ultimately, prime minister.

The winner of the contest is expected to be announced in the week of 22 July.

May, who has said it was a matter of deep regret that she had been unable to deliver Brexit, remains acting party leader during the leadership election process.

Meanwhile, the Conservatives fell to third place in the Peterborough by-election, behind winners Labour and the Brexit Party in second place, in what is traditionally a Tory-Labour marginal seat.

May’s time as leader has been dominated by Brexit, with her party divided over the issue, and the failure to get her deal through Parliament.

The UK was originally meant to leave the European Union on 29 March but that was then pushed back to 12 April and eventually 31 October.

When May announced her resignation, she said it was time for a new prime minister to try to deliver Brexit.

On Friday, May handed in her resignation letter to the 1922 Committee of backbench Conservative MPs.

The committee said it was now inviting nominations from those Conservative MPs “who wish to stand for election as the next party leader”.

Leadership nominations close at 17:00 on Monday, a statement said.

October 23, 2019 byTSM Web Desk No Comments
The PM will push for a general election if the EU proposes to delay Brexit until January, No 10 has indicated.

October 24, 2018 byMalik No Comments
Hurricane Willa, a storm described by forecasters as "life-threatening" and "potentially catastrophic", has made landfall in western Mexico.