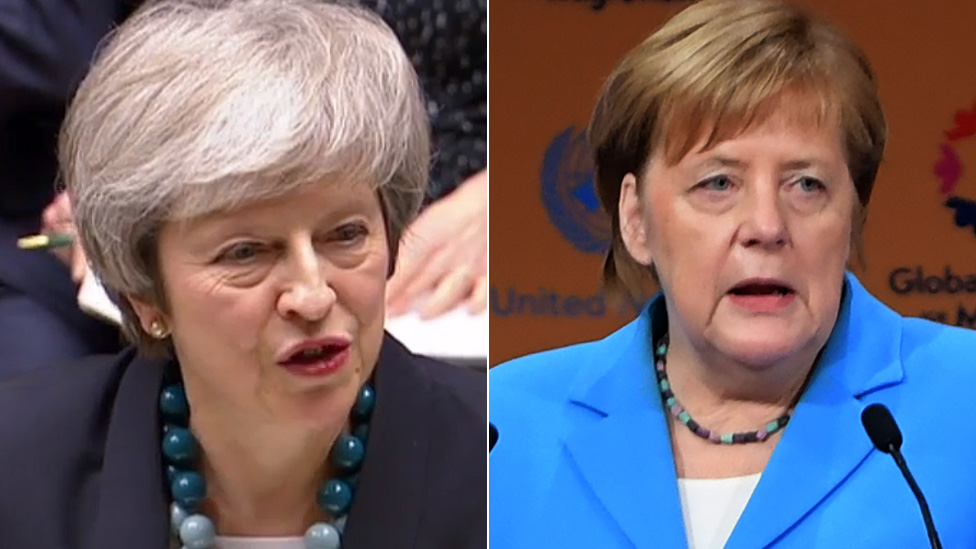 Theresa May will meet European leaders and EU officials later for talks aimed at rescuing her Brexit deal.

She will hold talks with Dutch PM Mark Rutte and Germany’s Angela Merkel after postponing MPs’ final vote on the deal.

The UK PM has said she needs “further assurances” about the Northern Ireland border plan to get Commons backing.

European Council President Donald Tusk insisted the EU would “not renegotiate” but said leaders would discuss how to help “facilitate UK ratification”.

Work and Pensions Secretary Amber Rudd said further talks with Brussels would focus on the Brexit “backstop” on the Irish border, which Mrs May earlier admitted had caused MPs “widespread and deep concern”.

The PM’s abrupt U-turn – after days of repeated insistence that the vote would go ahead – prompted Labour leader Jeremy Corbyn to secure a three-hour emergency debate on Tuesday.

“It cannot be right that the government can unilaterally alter the arrangements,” said Mr Corbyn, who earlier accused Mrs May of “losing control of events”.

No date has been set for the Brexit deal to again be put before MPs, although Mrs May indicated the final deadline for the vote was 21 January.

He is trying to get enough Tory MPs to submit letters of no confidence in the PM to trigger a leadership contest.

The Times reported that Crispin Blunt became the 26th MP to do so on Monday.

“I want to encourage those who are thinking about it; get it done,” Mr Blunt told the paper.

Forty eight Conservative lawmakers must submit letters for any challenge to be initiated.

In other Brexit developments:

So, what next for Mrs May?

The prime minister told MPs on Monday that a number of European leaders had “indicated that they are open to discussions to find a way to provide reassurance” over the backstop.

However, Irish Prime Minister Leo Varadkar said it was not possible to renegotiate the Irish border backstop proposal without “opening up all aspects” of the Brexit withdrawal agreement.

And Mr Tusk pointed out in a tweet that time for discussion was running out.

European leaders were already due in Brussels at a summit on Thursday but Mr Tusk’s spokesman said they would now meet specifically to discuss how to prepare for a no-deal scenario.

Mrs May will set off on another intense round of diplomacy before then, travelling to The Hague and Berlin to meet her Dutch and German counterparts on Tuesday.

She will then meet Mr Tusk and European Commission president Jean-Claude Juncker in Brussels.

The BBC’s Brussels reporter Adam Fleming said Mrs May was “trying get more legal oomph behind the language” in the withdrawal agreement about the EU using “best endeavours” to get a trade deal which would remove the need for the backstop to be used.

Dozens of Conservative MPs had been planning to join forces with Labour, the SNP, the Lib Dems, Plaid Cymru and the DUP to vote down Mrs May’s deal.

The Tory rebels and the DUP do not like the Northern Ireland “backstop”, a legally-binding proposal for a customs arrangement with the EU, which would come into force if the two sides cannot agree a future relationship which avoids the return of customs checkpoints on the Irish border.

Tory MPs say it is unacceptable because it would result in new regulatory barriers between Northern Ireland and the rest of the UK and could continue indefinitely, because the UK would not be able to leave without the EU’s approval.

DUP leader Arlene Foster said she had told the prime minister in a phone call that the “backstop must go”.

Will Labour now table a vote of no confidence in the PM?

Labour leader Jeremy Corbyn had been hoping to force a general election if Mrs May had lost Tuesday’s planned vote, by tabling a vote of no confidence.

In his reaction to Mrs May’s announcement that the vote would be delayed, he urged the PM to stand down because her government was now in “chaos”.

But Labour has rejected calls from the SNP, the Lib Dems and some of its own MPs, to hold a vote of no confidence in the prime minister on Tuesday.

A Labour Party spokesperson said it had more chance of success when the deal came back before MPs.

However, Labour will seek to keep the pressure on the PM in an emergency debate in the Commons – which was granted after MPs were denied a say in the cancellation of Tuesday’s vote. (BBC)

December 24, 2019 byTSM Web Desk No Comments
Republican Senator Mitch McConnell says he has not ruled out allowing witnesses to testify in the Senate impeachment trial of President Trump.

October 22, 2019 byTSM Web Desk No Comments
Japan's Emperor Naruhito has formally proclaimed his ascension to the throne in an elaborate ceremony.