Third round of meetings between SLPP and SLFP conclude 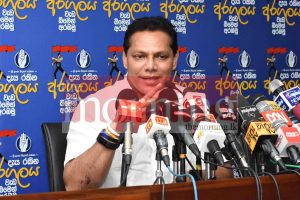 The third round of meetings between the Sri Lanka Podujana Peramuna (SLPP) and the Sri Lanka Freedom Party (SLFP) concluded today with both parties deciding to meet again next month.

The SLPP and the SLFP reached an understanding on several issues at talks held today (10) and have jointly decided on 9 May to further converse on the forming of the coalition and other matters.

SLFP General Secretary Dayasiri Jayasekera said that at the meeting held today, both sides reached an understanding on several issues and further matters will now be discussed with the leaders of both parties at the next meeting in May.

November 22, 2019 byTSM Web Desk No Comments
The Court of Appeal has lifted the overseas travel ban imposed on former President’s Secretary Lalith Weeratunga until the 13 March 2020.