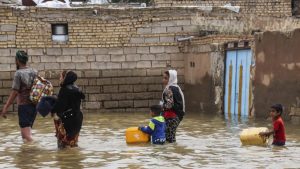 Heavy downpours are set to strike south western provinces and officials say they will release water from key river dams that are dangerously full.

Women and children are being moved to safer areas while men are asked to stay and assist with relief efforts.

In recent weeks, much of the country has been submerged and the death toll currently stands at 70.

Towns such as Susangerd, with a population of 50,000, will be left at risk, officials say. It is to be evacuated on Saturday, along with about five other communities in the province of Khuzestan.Around 70 villages in the province have already been evacuated in the past week.

Energy companies in the oil-rich region have helped the relief effort by using pumps to remove water.

Extremely heavy rain began on 19 March, affecting about 1,900 cities, towns and villages. Thousands of roads, bridges and buildings have been destroyed.

So far, 86,000 people are living in emergency shelters, of which about 1,000 were airlifted to safety.

Aid agencies are struggling to cope with the scale of the crisis and Iran’s state budget is under pressure due to US sanctions on energy and banking.

The government has promised that those affected, especially farmers, will be compensated for their losses.

The head of Iran’s elite Revolutionary Guards said the armed forces were “using all their power” to minimise damage. (BBC)

September 4, 2019 byTSM Web Desk No Comments
Tory rebels and opposition MPs have defeated the government in the first stage of their attempt to pass a law designed to prevent a no-deal Brexit.