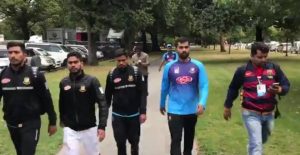 Bangladesh team escaped the deadly shooting at a mosque in Christchurch, New Zealand. A screengrab from a video, as posted by The Hindu on Friday

Bangladesh’s tour of New Zealand has been called off following the terrorist attack on two Christchurch mosques, in which at least 40 people have been killed on Friday, 16 March.

The team is safe, in lockdown at their hotel; it was en route to one of the mosques for Friday prayers at the time of the attack but escaped to the nearby Hagley Oval.

Bangladesh were to start their third and final Test at Christchurch on Saturday, 16 March.

They had lost their three-match ODI series 3-0 before losing the first two Tests coming into the final Test in Christchurch on Saturday.

Beating world’s no. 1 is a happy moment – Chandimal

October 24, 2018 byRevatha No Comments
This is what the two skippers said after the fifth ODI on Tuesday.

November 14, 2018 byRevatha No Comments
Half-centuries from Jos Buttler and Sam Curran swept England towards a competitive total on the first day of the second Test in Pallekele.