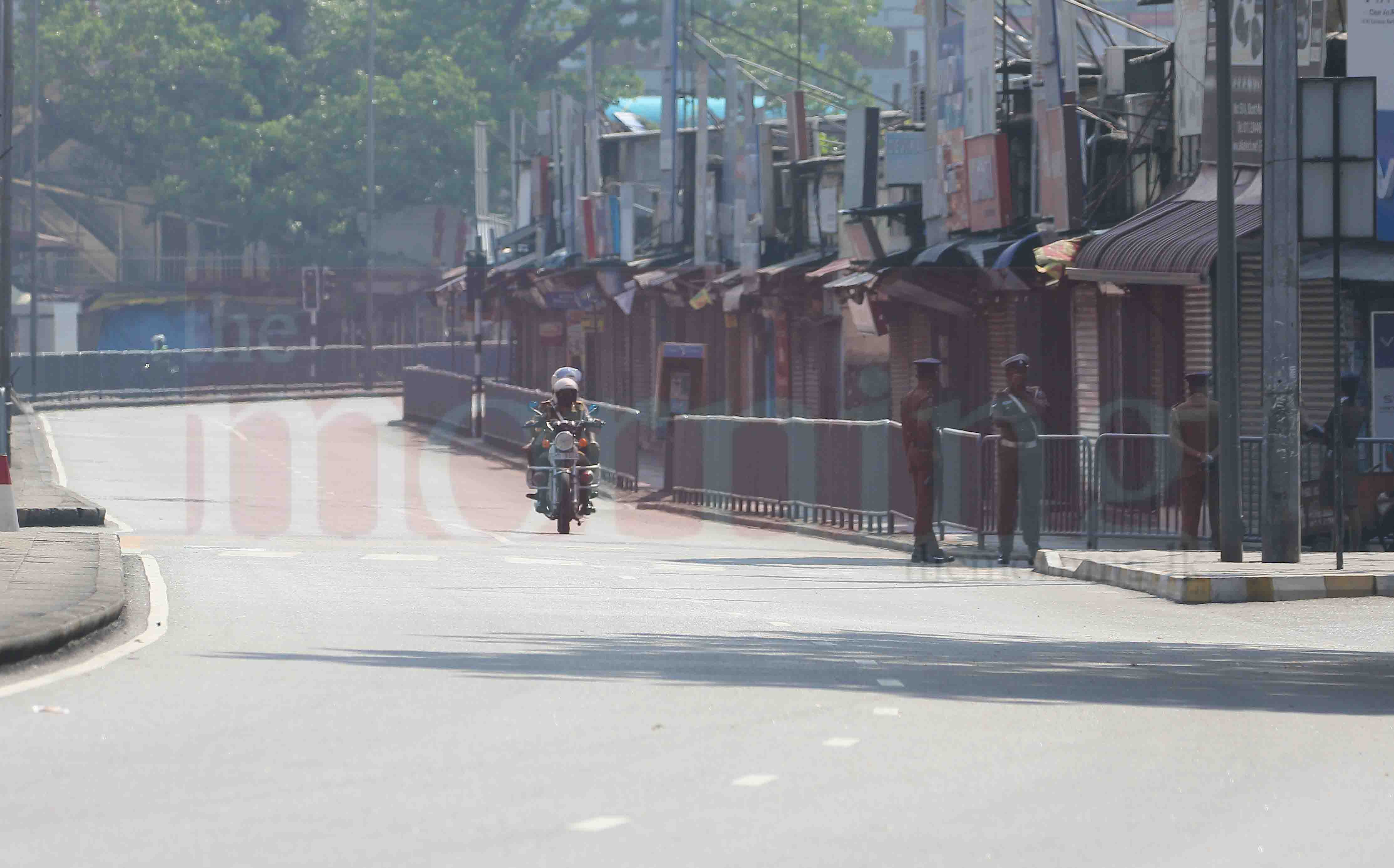 Time for selfishness or altruism?

Schoolboy cricket matches, panic buying, and not really taking things seriously are some forms of behaviour that seem to be plaguing Sri Lanka in this time of the coronavirus (COVID-19) pandemic, which is rather unfortunate. While many have followed what the experts have advised – i.e. washing hands, practising social distancing, reducing travel, and getting tested if you display symptoms – there have been many who have not heeded these instructions.

National Institute of Infectious Diseases (IDH) consultant physician Dr. Ananda Wijewickrama revealed to The Sunday Morning Brunch that according to his experience, there is a concerning lack of awareness amongst the public about the seriousness of the virus. He provided that the media has been unsuccessful in creating awareness, adding that even while being late to convey this message to the public, it is not being done in either a sufficient or effective manner.

Dr. Wijewickrama singled out a certain headline carried out over the weekend. “This headline in this newspaper read something along the lines that those who attended the Royal-Thomian (RoyTho) had braved the pandemic. This is ridiculous!”

He said that as can be seen now, we are facing the consequences of such actions; they did not take into consideration that one person could give it to 10 people and that 10 can transfer it to 100 easily. He also stated that while in most of the identified cases, they attempted to trace those who came into direct contact and isolate them, people must be responsible in their actions.

The Royal-Thomian cricket match (aka. Big Match) has come under heavy fire from the public due to an attendee being diagnosed with the virus. Since the incident took place, there has been an uproar from people rushing to chastise those who went despite the numerous warnings.

In his address to the nation recently, President Gotabaya Rajapaksa also stressed that the organisers were told not to go ahead with the Royal-Thomian cricket match, stating that he had advised the organisers to stop the match, but they had insisted that the game continue.

Following are some sentiments shared by some of the Twitter community.

“Your 140-year-old tradition of getting drunk and partying for three days and then partying some more for good measure is going to be remembered for the possible deaths of thousands of people. All the influence and money in the world cannot save you from this.”

“Any and everyone who went to the Big Match this weekend (which, if my Instagram stories are any indication, is all of you) – take responsibility and stay at home. You all (have) already done enough damage.”

“This was elitism and selfishness at its best, putting the entire nation in jeopardy. Anyone with two brain cells could see that this was a massive risk, with the whole ‘Dudebro Hugfest’ making it a festering petri dish for the virus to spread.”

Some shared very valid points, such as: “As young people, we feel invincible, but something that I think about a lot are my grandparents and the people who are going to be impacted way more dramatically than we are.”

The public has not been happy, especially considering how some of those who attended have been stepping forward to defend their actions. However, the RoyTho is but a small example of how people have been behaving in a time of a very real global health crisis that has found its way into our country.

The ‘It’s not a real threat’ mentality

Dr. Wijewickrama further said that it is extremely unfortunate that the public are behaving this way and also how the media too failed to relate the gravity of the situation. He also shared another incident where one of his colleague who works in the Matugama (District) Hospital stated that people in that area were still going on pilgrimages and shopping for clothes for the New Year while most shops remained open. “Sri Lankan people are yet to truly grasp the threat posed to us,” he said.

Not taking things too seriously is not just an issue in Sri Lanka. In the US, via a poll carried out by National Public Radio (NPR), it was revealed that very few Americans view the pandemic as a real threat. Just about 56% of Americans consider coronavirus a “real threat”, and a growing number of Americans think coronavirus is being “blown out of proportion”.

Even in Russia, with a relatively small number of people infected, the public remains sceptical of the pandemic. They believe it wouldn’t affect them or they just don’t care and don’t want to panic at all, he said.

Panic buying was a very real issue in many countries including Sri Lanka, albeit in smaller proportions largely in the urban areas.

On 12 and 13 March, supermarkets were left scampering to place new orders and transport goods from their warehouses into retail outlets over the weekend following widespread panic buying in Colombo and its suburbs. Panic buying was triggered after the first two Sri Lankans tested positive for coronavirus, leading to fears of a shortage of food and groceries resulting from a possible lockdown.

The act of panic buying has been addressed in countries where it has been causing devastation for certain households. University of the Arts London consumer psychologist Paul Marsden said: “It’s about ‘taking back control’ in a world where you feel out of control.” He explained that another cause of this is that “the public is getting conflicting advice from the government and retailers. So people mass-buy. I blame the system for not having a unanimous voice on what we should be doing”.

Irrational and selfish incidents as such are likely the exception, not the rule, but an “everyone-for-themselves” mentality also tends to rise amongst communities, particularly considering the lack of co-ordination and co-operation amongst nations until very recently.

The worst of it however has been those seeking to profit from the situation. Some examples of this were seen at the height of the epidemic, which can be viewed as a further risk for our country as well, where attempts were made by certain organisations claiming protection from the virus.

An Ayurvedic wellness-based food service offered an organic immune booster shot with branding that carried implications of it increasing immunity against coronavirus, a faith-based organisation had advertised immunity boosting workshops at a price, and tickets for an awareness seminar were advertised for professionals to learn more about the virus – these advertisements have since been edited to avoid confusion of being linked to coronavirus, removed, or cancelled. However, the opportunity was seized without much consideration.

Speaking about the psychology of people in a time of crisis, New York University’s Stern School of Business Professor of Ethical Leadership Jonathan Haidt shared: “A situation like this causes two of our more primal and conflicting impulses – selfishness and altruism – to bump up hard against each other…I can say we all do care about the welfare of other people, although inconsistently.”

However, as we said before, such behaviour is often the exception and not the rule as we have seen many examples of companies and corporates stepping up and providing relief wherever they can.

Airbnb, a global giant in hospitality, has greatly suffered due to the virus. However, Airbnb CEO Brian Chesky tweeted: “First, Airbnb will allow guests around the world to cancel and get their money back. We will not collect fees on these bookings.” Airbnb updated its cancellation policy and is letting guests around the world cancel their reservations for a full refund without cancellation fees.

Hemas Holdings PLC General Manager (GM) – Group Sustainability and Corporate Communications Shiromi Masakorale shared that they made the decision to allow their employees to engage in social distancing and work from home as soon as the Government announced the need. “Excluding the essential services like pharmaceuticals and hospitals which now work on a roster basis, we have made use of technology in carrying out meetings by virtually working in real time,” she said, adding: “Because of these apps and technologies, we are very well connected despite having to work from home.”

Colombo City Restaurant Collective (CCRC) President Harpo Gunaratne said this is the worst they’ve suffered yet. However, considering the risks, they have asked their staff to stay at home and are only doing deliveries from their restaurants. However, he also urged the Government to look into this matter as there will be many left without jobs.

Speaking to the Health Promotion Bureau, sources shared that our health system is well equipped to handle the situation and that we have received the relevant assistance as needed. They also shared that the Presidential Task Force headed by Army Commander Lieutenant General Shavendra Silva has tracked down those who came into direct contact with the currently identified patients with military precision and since Wednesday (18), there hasn’t been an exponential rise in the cases. In comparison to other countries, at this stage of discovering the virus, Sri Lanka is faring very well.

They shared that there is no need for a mask unless you are an infected person, taking care of an infected person, or in the vicinity of an infected person. However, the best thing to do is to stay away from social gatherings and non-essential travelling, wash your hands regularly, cook food thoroughly, keep a distance of one metre from persons, and rely only on official, credible news sources as there is an epidemic of misinformation spreading, which could be as harmful as the virus itself.

Bear Appeal – a solution to your wardrobe woes

June 20, 2019 bythemorninglk No Comments
During the past two years, you’ve most likely heard the terms “Bear Appeal” or “Bear Apparel” being used by members in your friends’ circle who usually have a very minimalist sense of style with more

High tea by the pool