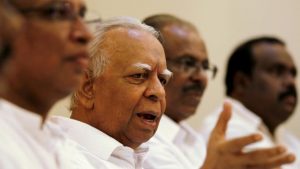 The international community was duped into believing that a political solution could be reached following the defeat of the LTTE, TNA leader R. Sampanthan said.

He expressed these views during the Parliamentary session today(8).

“The military defeating the LTTE is also substantially attributable to the assistance that both India and the international community provided during the war.”

“The terrorist organisation was seen by Sri Lanka and India as an impediment to a reasonable political solution,” Sampanthan said.

He added that commitments were made by the Mahinda Rajapaksa government to India and the international community in regard to a political solution following the end of the war.

He said therefore commitments should be honored and an acceptable and satisfactory political solution be brought by the new government in terms of the 13th amendment.

He said that certain aspects of the 13th Amendment to the Constitution cannot be accommodated, especially handing over Police powers to the Provinces.

November 6, 2020 byLahiru Pothmulla No Comments
A total of 32 personnel who visited the Lady Ridgeway Hospital for Children (LRH), Borella had tested positive for COVID-19 so far, its Director Dr. G. Wijesuriya said.

PHIs decide to call off strike from tomorrow

July 28, 2020 byTSM Web Desk No Comments
Public Health Inspectors’ Union of Sri Lanka (PHIUSL) has decided to call off its strike from 7.30 am tomorrow(29).