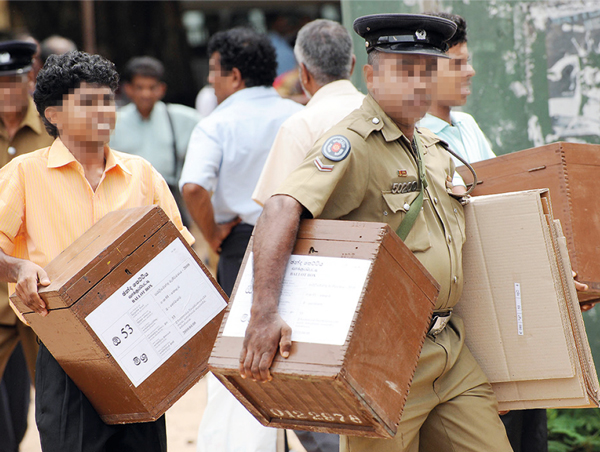 The Elpitiya Pradeshiya Sabha election which is to be held next month will cost an estimated Rs. 15 million and would see some 53,000 voters taking to the polling booths.

The Elipitiya Pradeshiya Sabha elections were suspended from being held along with the others during the 2018 local government election held on 10 February.

The suspension was due to the Democratic United National Front (DUNF) nominations list being rejected in December 2017.

Subsequently, the DUNF lodged a petition alleging an injustice was done by their list being rejected.

In a surprise result, the Sri Lanka Podujana Peramuna (SLPP) led by former President Mahinda Rajapaksa and the “Joint Opposition” (JO) came first by winning 40% of the votes and securing the most number of seats and local authorities.

The United National Front (UNF) led by Prime Minister Ranil Wickremesinghe and the United National Party (UNP) came second with 29% of the votes whilst the United People’s Freedom Alliance (UPFA) led by President Maithripala Sirisena and the Sri Lanka Freedom Party (SLFP) came third with 12% of the votes. On 30 August 2019, the Supreme Court ordered the Election Commission (EC) to hold the elections of the Elpitiya Pradeshiya Sabha after accepting nominations from the DUNF.

Consequently, on Monday (2), the EC announced that the Elpitiya Pradheshiya Sabha polls would be held on 11 October. Accordingly, the EC is gearing up for the polls.

Rathnayake said that there are 17 wards in the Elpitiya Pradheshiya Sabha with 53,384 registered voters to vote at a total 47 polling stations.

A total of 28 councillors can be elected to the Elpitiya Pradheshiya Sabha.

Five political parties have registered to contest the election, namely the UNP, SLFP, Janatha Vimukthi Peramuna (JVP), SLPP, and DUNF, Rathnayake said. He added that each party could field 31 candidates.

With regard to election law violations and violence, Rathnayake stated authorities expect a peaceful election.

“The 2018 local government elections were held successfully without any major incidents. Therefore, we believe that it would be the same this time around too.”

However, election monitoring body Campaign for Free and Fair Elections (CaFFE) told The Sunday Morning that election violence and law violations were a possibility, especially with the presidential election around the corner.

“The Elpitiya PS polls will be a test run for the Presidential elections so the parties will go there and grease the palms of the voters,” CaFFE Executive Director Manas Makeen told The Sunday Morning.

He said that political parties would seek to distribute dry rations, alcohol as well as provide financial assistance to sway voters.

“CaFFE will especially monitor this at the grassroots level,” he said adding that CaFFE would also be keeping close watch on the misuse of state property.

Makeen went on to say that CaFFE would be deploying election monitors closer to the poll date.

“We hope to deploy around 150-200 election monitors when the election date gets closer. However, we do hope for a peaceful election,” Makeen said.

May 6, 2019 bythemorninglk No Comments
In the aftermath of Easter Sunday’s shocking terror attacks, there have been fresh moves by the United National Front (UNF) Government to enact the controversial Counter Terrorism Bill (CTB).

August 26, 2019 byThe Sunday Morning No Comments
The budget allocation for recurrent and capital expenditures of the Parliament of Sri Lanka stands at well over Rs. 3.5 billion for 2019, out of which over Rs. 2.7 billion is allocated for recurrent