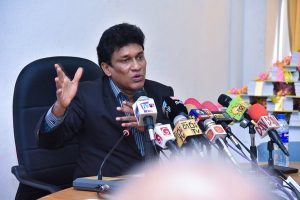 The TPA announced its decision during a press conference held at the Parliamentary complex today with the participation of Premadasa.

Ganesan said the three political parties under the TPA had unanimously agreed to join the new alliance and support Premadasa at the forthcoming polls.

September 1, 2019 byThe Sunday Morning No Comments
Several countries including Canada and the US were absent from the Defence Seminar held in Colombo last week.