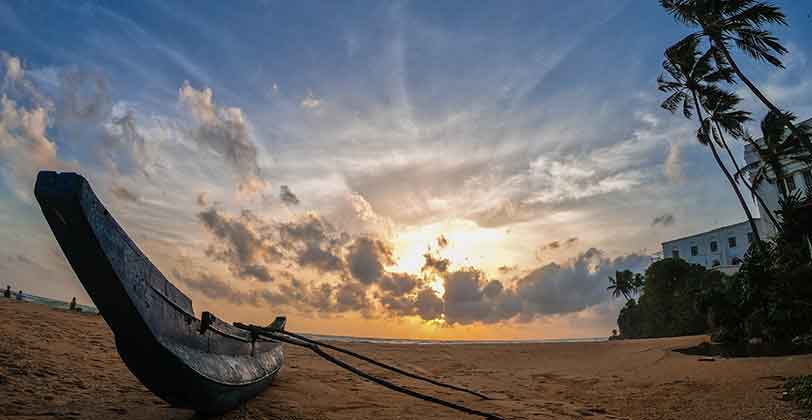 Travel is back on the rise – but keep in mind, it’s not yet ‘post’ Covid

June 28, 2020 by Dimithri Wijesinghe No Comments

Post-Covid travel is already a trending topic. While using the term “post-Covid” is an oversight in itself, the feeling seems to be reflective of the laissez-faire attitude most Sri Lankans have adopted when it comes to leaving the house as of late.

The past three months have been literal hell on earth for a large group of people for a number of reasons. However, a certain set of people are more than making up for it, now that curfew has been lifted. The travel enthusiasts of yesteryear are now making their way into the wilderness.

We reached out to a number of well-known travellers who have attempted to take a few trips around the island to share their thoughts on the lay of the land, what post-curfew travel is like, and how it really differs from the times when Covid was not something we needed to deal with.

Harinie Weerasinghe of @khannabliss, who took a trip to Arugam Bay to surf, shared that on a regular day, the specific surf point she frequents was often really crowded. She shared that it was really hard to catch a wave, with boards constantly knocking on you. However, considering that the beaches are quite free now, you can have a relaxed experience. “Everything is just calmer; just easy and nice,” she said.

Before all this happened, everyone else was just hustling, but the situation has brought about a welcome change of pace, she said. However, while according to Harinie the beaches Down South appear to be less crowded, some other local travellers making their rounds had a slightly different experience.

Kavindi Athapattu of @Travel_and_nibbles, who visited Mirissa and Unwatuna this past weekend, said she was most surprised by the sheer number of locals she saw out and about. “The crowds made it seem like its business as usual. Because there are many offers and lots of discounts, everyone is out now, and there’s no lack of travellers. I live in Aluthgama, and even here it has been pretty crowded,” Kavindi emphasised.

She drew attention to some issues one may face when travelling these days. One major concern was the unpredictability of public transport. “There’s an issue when it comes to transport, unless you have your own vehicle, as public transport is unpredictable. And I don’t think it’s a good idea to go out if you are relying on public transport without really looking into it.”

Kavindi also drew attention to the service aspect of restaurants and food outlets, and how your experience may differ from what you are otherwise used to. “One thing I can say is the quality of service you’ve come to expect may be different, which is understandable since they (establishments) may have had to downsize on staff and so their usual chefs may not be available.

“There was a place in Mirissa which I usually love, but the food was different to what I was used to (have). However, this is totally understandable and those things will take time to go back to normal.”

She did, however, point out some of the more positive experiences she had. She shared that one good thing that may come out of this is the lifestyles of Lankans may get a little better. “One thing I noticed was that the hygiene (level) is definitely far better than it was pre-Covid; there are much higher standards expected from everybody, and even the smaller shops you find on the roadside have adopted the safety measures.

“I think people are even less likely to fall sick, especially considering how one would still go to work if they were slightly ill before the pandemic, but now people are a lot more sensitive and are more concerned, and so the exposure to germs is far less.”

We reached out to Supun Hasanka of @Travel_with_Suppa, who is often a solo traveller. He said he had a different experience when it came to public transport, but he too echoed a similar experience in observing local travellers. “Recently, I went to Kithulgala for waterfall hunting. It was only a one-day trip, and from what I observed, things are getting back to normal little by little. Just as the curfew was lifted, we visited Aberdeen Falls and the Lakshapana Dam; on a usual day before the pandemic, these were often crowded places, with vloggers and large groups camping and at the time. I was by myself when I went but things seem to have changed drastically since those early days after the curfew was lifted,” he said.

“I am a solo traveller and I use public transport. I have not experienced any difficulties in getting transport thus far. The buses and even trains were running as normal. However, locals are definitely not adhering to any of the guidelines – no one is maintaining social distancing and the conductors and drivers have to enforce the mask rule; thankfully, these are not overcrowded buses, but the guidelines are being laxly followed,” he spoke of transportation.

This concern of the safety precautions not being followed properly is primarily an issue if you are spending a lot of time on the road and in public places, as most tourist establishments like hotel chains and restaurants follow the guidelines to the best of their abilities.

Sharmal Kelambi of @traveldocfam, who was travelling with an infant, shared that for the most part, travelling was stress-free when it came to more established hospitality chains, stating: “When travelling after the lockdown, we had to be extra cautious since we were travelling with a one-year-old baby girl. She does not wear masks, has no idea about hand hygiene, and runs around everywhere. When we entered the hotels we visited, they were disinfecting the luggage, the staff were wearing masks, and hand hygiene was promoted. But once inside the hotel, guests only wore masks when visiting restaurants, and then took these off when eating. People mixed leisurely in the pool, but the pools were less crowded than before. Overall, everyone was cautious.”

This general trust that travellers have for more established hospitality operators was shared by many of the people we reached out to, with Yasseen of @Longweekend also sharing his thoughts on how, despite preferring to go to smaller places, they simply felt safer at establishments that had the means to follow through with adhering to the health guidelines effectively.

“Sri Lanka Tourism is mainly targeting high-end clientele; they are already looking to cater to a lower number of people at any given time, which is a very attractive option. Even we are not looking to go to crowded places; we want to be outside but not amongst crowds, so boutique hotels and private villas are a better option. However, I do find myself avoiding smaller places purely because I don’t think they have the budget and the capacity to follow the safety guidelines as it can turn out to be expensive,” he said. “For example, when they went to Taj Bentota, the pool there was cleaned everyday and the chlorine levels were checked four times a day. For a small establishment, this may not be very practical; if it is a bigger chain, they have the resources.”

Yaseen said that getting back to normal after the lockdown, one of the major differences one would notice would be that these smaller establishments are likely to lose out on business compared to the bigger establishments, the primary reason being what he discussed above. “It’s a bit of a tough luck for the smaller players, I would say.”

It would appear that despite people opting to travel and take up some of the discounts and offers that are being touted around, there are some concerns with regards to safety – this is a good thing, despite this fear being detrimental to the economy.

Additionally, there are other concerns as well, such as how locals in rural areas may feel when their villages are being frequented by a hoard of travellers who may or may not be a risk factor.

Thusitha of @Ceylon_adventure_seeker touched on this fact as one of the concerns he personally had when considering resuming his usual travel. “I guess by August or mid-July, everything will go back to normal, and the Government has said they will open the airports in August. However, we must ensure we follow the safety measures at least till the end of this year. My biggest concern is how our villagers would react to us hiking in and around their villages. They might either be okay with it or they might not like it as most of us would be coming from Colombo, which used to be a high-risk district. That’s my biggest concern.

“The other thing I’m worried about is how people would start to travel in the ‘new normal’. We used to travel in large groups of 20-25 back in the day; I am not too sure if that will be the case still. I hope people would try to travel alone or with a few close friends only. After all, people might eventually forget about the virus and go back to the same lifestyle before it.

“One more concern I have is, until this planet is confirmed as corona-free, we might not be able to be fully sure that we won’t encounter a Covid-19-positive person during our trips. So when we go on trips, we still have to maintain social distancing.”

Working in the Matrix

October 11, 2018 byJennifer No Comments
Demonstrating its commitment to ‘Give Back Life’ to PET plastic bottles, Coca-Cola Beverages Sri Lanka Ltd. along with the Road Development Authority (RDA) and Eco-Spindles Pvt Ltd. (part of BPPL Grou