November 22, 2020 by Madhusha Thavapalakumar No Comments

Refusal to manipulate statistics the reason?

Ananda Kithsiri Seneviratne, who was serving as a Deputy Secretary to the Treasury, had been summarily transferred two weeks ago without providing reasons, The Sunday Morning Business reliably learns. 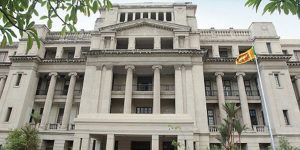 “I do not know the reason for any transfer so I cannot confirm the rumors, but I abide by the Cabinet’s decision,” Seneviratne stated.

Seneviratne had served as one of the deputy secretaries to the Treasury since February 2018 when he was appointed by the previous Government.

During a post-budget discussion on Wednesday (18), MP Dr. Harsha de Silva stated that a senior Treasury official had been transferred for refusing to manipulate statistics.

“We heard that a high-level Treasury official who refused to manipulate statistics has been removed from his post. We need officials who do not dance to the tunes of politicians. We can’t solve economic issues by manipulating figures.”

De Silva went on to claim there are discrepancies between the statistics compiled by the Central Bank of Sri Lanka and the Treasury, and charged that the Government is taking steps to prevent the “true state” of the economy being exposed to the public.

All our attempts to reach Dr. de Silva for further comment proved futile. However, when contacted, former State Minister of Finance MP Eran Wickramaratne said that Seneviratne is an “upright officer” who may have been “a thorn in the flesh” of the Government.

“I have no firsthand information but I could say that he is a professional and normally handled things like budgets and cash flows. He is a very upright officer who does things which he thinks are correct. He will not be pressured to change his views unless there is a good rationale for changing it. Certainly, there are lots of problems with the numbers that have been provided in the budget and their credibility. Having Seneviratne dealing with that could have certainly been a thorn in the flesh of the Government. However, I do not know the exact reason for the transfer, but it will be a loss to the Treasury and to the country to have that level of experience out of it,” Wickramaratne said.

The two remaining deputy secretaries, who are P. Algama and R.M.P. Rathnayake, were appointed in January this year by the current Government.

When we contacted Treasury Secretary S.R. Attygalle to inquire about Seneviratne and the allegations levelled by the opposition MPs, he dismissed them.

“That’s what he (Dr. de Silva) is saying but these are transferrable appointments. We need people who inspire confidence to work with. He was dealing with statistics. This is not something new. Several DGs (deputy governors) were changed and nobody asked about it. Young people are being appointed. This is normal. They are talking as if it’s a big issue because we have submitted the budget and they just want to create issues,” he said.

This is not the first time allegations have been levelled against the Government for trying to influence state officials. In October, former Central Bank Senior Deputy Governor Dr. Nandalal Weerasinghe resigned from his position, and there was speculation that he had paid the price for standing up against political pressure. In May, two members of the Monetary Board of the Central Bank, Nihal Fonseka and Dr. Dushni Weerakoon, submitted their resignation upon the request of the Government to “enable the reconstitution of the Monetary Board”.

Since January 2018, he had been working as the Director General of the Department of National Budget until he was appointed as a Deputy Secretary of the Treasury. In January this year, Seneviratne was also appointed as a non-independent non-executive director of Sri Lanka Telecom (SLT).

August 22, 2019 byCharindra No Comments
Sri Lanka Tourism is expecting the participation of over 25,000 tourists from around 40 countries for the Bohra Global Convention that is set to take place from 1 September to 10 September.

Blaming the banks: Why a credit guarantee is better

June 27, 2020 byCharindra No Comments
Dhananth Fernando of the Advocata Institute explains why a Credit Guarantee is the most suitable solution to issues around the banking sector relief and loans.

Sri Lanka to commence flights to Myanmar from mid-2021