December 3, 2019 by Charindra No Comments 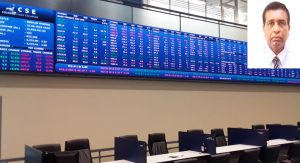 Deputy Secretary to the Treasury A. R. Deshapriya was appointed today (3) as the Chairman of the Securities and Exchange Commission of Sri Lanka (SEC), which regulates the Colombo Stock Exchange, The Sunday Morning Business learns.

The appointment was made by a six-member committee headed by former Secretary to the Cabinet of Ministers Sumith Abeysinghe which was set up recently to select suitable professionals to lead State-owned enterprises and regulatory and statutory bodies.

Deshapriya has 30 years of work experience in the public sector and is a special grade officer of Sri Lanka Administrative Service (SLAS). He has worked in different areas of the public sector and held various positions of the General Treasury including the Director and Additional Director General. He held the post of Additional Secretary of Ministry of Skills Development and Vocational Training directly overlooking the Technical and Vocational Education Training Sector (TVET) in Sri Lanka.

Before becoming Deputy Secretary to the Treasury, he worked as Director General of National Budget Department. He has served as a member on the Board of the Sri Lanka Insurance Board and a Board Director of the Regional Development Bank. He holds a BSc Degree in Public Administration from the University of Sri Jayawardanapura, Sri Lanka and MBA Degree from University of Lublijana, Slovenia.

Deshapriya replaces Chartered Accountant Ranel Wijesinha, who was appointed as Chairman of the SEC in mid-2018 replacing Thilak Karunaratne.

The SEC is the licensee and the regulator of the Colombo Stock Exchange, Stockbrokers, Unit Trusts and Margin Providers.

July 11, 2019 byCharindra No Comments
Travel + Leisure, a US-based travel magazine which has 4.8 million readers worldwide, has ranked Sri Lanka Number 1 in its list of 'The 15 Best Islands in the World' released yesterday.