September 13, 2020 by Skandha Gunasekara No Comments 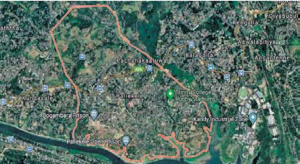 The report by the Geological Survey and Mines Bureau (GSMB) on the earth tremors felt in the Kandy District last month have found that the tremors were natural seismic events, which called for surveys of the Victoria Reservoir for possible cracks.

On 29 August, an earth tremor was felt in parts of the Kandy District in Digana and Haragama, where some residents had claimed that picture frames and other items had fallen off walls and shelves as a result.

Subsequently, the GSMB sent out a team of seismologists to conduct an investigation. GSMB Director General Eng. Sajjana de Silva said that the findings of the investigation had been compiled in a report. “It was found that the seismic tremors were of natural origin related to stress release. The main event which occurred at around 8.32 p.m. on 29 August had a magnitude of 2.0 units on the Richter scale. The main event could be considered a tremor – a classification for small earthquakes,” he said.

The report found that the origins of the tremor were directly south of Aluthwatte and north of Anuragama.

“The seismographic information and public observations suggest that the event, presumably all four events, had taken place at almost the same location, although the stress release may differ slightly. The events may have been confined to the area directly south to Aluthwatta and north to Anuragama.”

The report also stated that important observations were made at the reservoir close to Aluthwatte. “The waveform analysis of seismic stations and information received from the general public in the area of influence indicate that this train of events, including the main event, is caused by natural phenomenon; the release of stress in the form of seismic energy. A few critical observations were reported in the reservoir close to Aluthwatte, as the release of air bubbles was witnessed, coinciding with the second pre-event.”

The report found that there had been four events in total, of which two were foreshocks of the main event. “Two pre-events that were recorded at the two stations are potentially foreshocks of the main event and the post event that took place on 2 September 2020 (7.06 a.m. local time) could not be categorised as an aftershock of the main event. Considering the time lag between the main event and the post event, it is not possible to conclude the post event as an aftershock of the main event. Therefore, it could be concluded that all four events took place at approximately the same locality and energy may have been transferred linearly along the valleys. The weathered formations and marble rocks have enhanced the amplitude as many of the dwellers in such areas felt the event with relative high intensity than the nearby areas, which are composed of charnockitic rocks.”

The report has made several recommendations, including the continuous monitoring of these areas by the GSMB for the foreseeable future. “The felt area shall be exposed to a continuous monitoring process by the GSMB on a long-term basis and based on the acquired data sets, descriptive models should be developed to understand the regional, geological, and seismotectonic behaviour in order to make decisions on policy making on land use practices, educate the general public in the area about the possible vulnerabilities, and mitigate earth-related risks. It is recommended that GSMB shall run a temporary, high-sensitive network covering interested areas enabling the studying and understanding of such events. Possibilities for such initiatives shall be explored under the Memorandum of Understanding (MoU) with the GFZ (GFZ German Research Centre for Geosciences), other foreign scientific and technical collaborations, and through the funded projects conducted by the Disaster Management Centre,” the report said.

It is also recommended that quarry blasting in the area be done according to a time table to assist with surveys of future events. “Quarry blasting of the area shall be conducted according to strict time frames and agreed upon preschedules, enabling the discarding of such artificial blasting in a possible future natural event(s).”

In addition, the report has called on a survey of the left bank of the Victoria Reservoir for potential cracks and to ensure all seismic stations are fully operational. “Considering the widespread mining and blasting activities in the region, particularly at the left bank of the river, conducting a crack survey would be very appropriate to determine the background status of the area pertaining to the construction practices. It is apparent that the main event influenced the preexisting cracks as crack widening has been observed at several locations in the affected region. This proposed crack survey shall initiate immediately.”

GSMB Deputy Director General – Geology Udaya De Silva said that there was no danger to human lives and that the limestone industry would not be affected. “This is a natural occurrence and poses no danger to those residing in the area. It also must be noted that the limestone industry in the area was not the cause of the tremor and the industry would not be affected in any way.”

He went on to say that there was no threat to the Victoria Reservoir either. “These are small tremors and quite natural. The seismic stress had been released through the limestone and will not cause any harm to the reservoir.” Meanwhile, Mayor of Kandy Kesara Senanayake said the city was prepared for any repeated occurrence. “If there is an emergency, as a municipal council, within our city limits, we are prepared,” Mayor Senanayake said.

December 2, 2018 bythemorninglk No Comments
A new organisation using the name “The Liberation Tigers of Tamil Eelam” has emerged in Switzerland, forcing the Government to keep a close watch on their future moves.