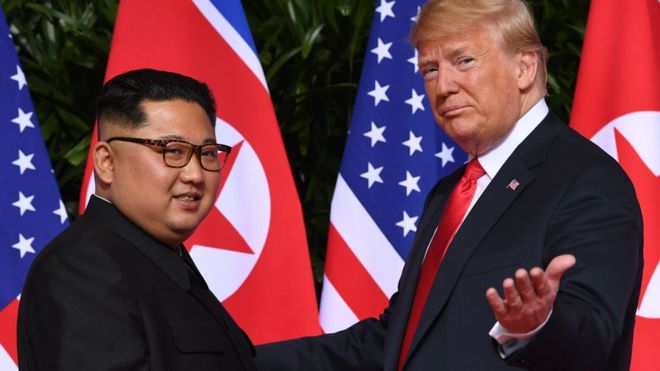 US President Donald Trump has announced in his State of the Union speech that he will hold a second nuclear summit with North Korea’s leader this month.

In an address to the nation with the theme “Choosing Greatness”, he vowed once again to build a border wall.

In a rebuttal, Democrats accused Trump of abandoning US values.

He provoked the crippling closure of federal agencies by demanding funding for a US-Mexico border wall only to backtrack when Democrats flatly refused.

What did he say about North Korea?

Trump said he would meet Kim Jong-un in Vietnam from 27-28 February.

Plans for a second summit have been in the works since the two leaders’ historic talks last year.

Trump and Kim’s meeting last June in Singapore was the first ever between a sitting US president and a North Korean leader.

On Tuesday night, Trump said: “Our hostages have come home, nuclear testing has stopped, and there has not been a missile launch in 15 months.

“If I had not been elected president of the United States, we would right now, in my opinion, be in a major war with North Korea.

“Much work remains to be done, but my relationship with Kim Jong-un is a good one.”

What did he say about political unity?

After two years of toxic partisanship, Trump on Tuesday night repeated calls for political unity that he has made in his last two annual speeches to Congress.

“Together, we can break decades of political stalemate,” he said.

But hours before the speech, Chuck Schumer, the Democratic leader of the Senate, accused Trump of “sowing a state of disunion” for most of the year.

In a private lunch with news anchors at the White House on Tuesday, Trump called Schumer “nasty”, using an offensive term, the New York Times reported.

As Trump delivered his primetime speech on Tuesday, his chief congressional antagonist was sitting at the rostrum over his shoulder.

The Democratic leader of the House of Representatives, Speaker Nancy Pelosi, led resistance to the president’s demands for wall funding and she regularly mocks him. (BBC)

July 31, 2019 byRandev No Comments
North Korea has fired two short-range ballistic missiles off its east coast, according to South Korea's military, the second such launch in a week.