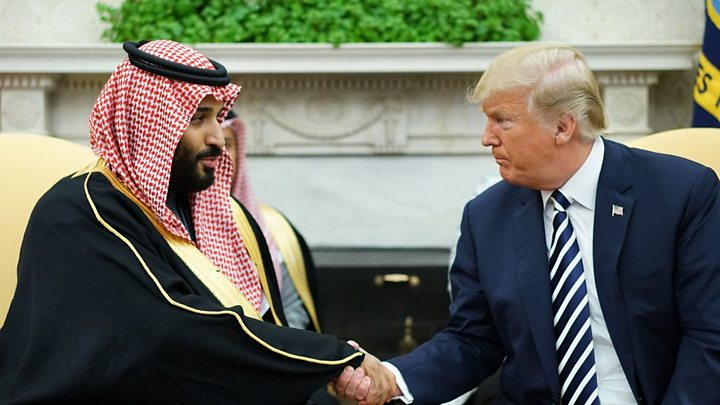 US President Donald Trump has been asked to ascertain whether Saudi Crown Prince Mohammed bin Salman played a role in the murder of Jamal Khashoggi.

Republican and Democratic leaders of the US Senate Foreign Relations Committee on Tuesday sent a letter demanding a second investigation.

Trump earlier defended US ties with Saudi Arabia despite international condemnation over the incident.

Khashoggi was killed on 2 October inside the Saudi consulate in Istanbul.

In a statement on Tuesday, Trump acknowledged that the crown prince “could very well” have known about Khashoggi’s brutal murder, adding: “Maybe he did and maybe he didn’t!”

He later stated that the CIA had not made a “100%” determination on the killing.

In it they called on Trump to focus a second investigation specifically on the crown prince so as to “determine whether a foreign person is responsible for an extrajudicial killing, torture or other gross violation” of human rights.

The request, issued under the Global Magnitsky Human Rights Accountability Act, requires a response within 120 days.

Saudi Arabia has blamed Khashoggi’s death on rogue agents but denied claims that the crown prince had knowledge of the operation.

US media have reported that the CIA believes Mohammed bin Salman ordered the murder.

In an interview on Sunday, Trump told Fox News that he had refused to listen to a recording of Khashoggi’s murder provided by Turkey, calling it “a suffering tape”.

A dark shadow for years to come

For Saudis, and especially Saudi leaders, there will be a sigh of relief. But, it’s also what they expected, and what they’ve always said about President Trump – he will be a true friend of the Kingdom.

Both sides want to draw a line under this major crisis – and global outcry. But as Trump acknowledged, and Saudis know, it won’t go away. Not for many in the US Congress, as well as for many others, including countries who will continue to call for greater clarity.

Many Saudis say they don’t believe their country’s de facto ruler, Crown Prince Mohammad Bin Salman, would have ordered such a despicable act. Many, who’d long been hoping to see their country move forward, have been shaken by this shocking murder, and regret it will cast a dark shadow for many years to come.

In the words of one prominent Saudi: “It has brought Saudi Arabia ten steps back.”

Meanwhile, Lindsey Graham, a senator from Trump’s Republican Party, has predicted strong bipartisan support in Congress for sanctions against Saudi Arabia “including appropriate members of the royal family”.

What does Trump’s statement say?

“The world is a very dangerous place!”, Mr Trump states, before holding up Saudi Arabia as an ally of the US against Iran.

The kingdom spent “billions of dollars in leading the fight against Radical Islamic Terrorism” whereas Iran has “killed many Americans and other innocent people throughout the Middle East”, it says.

The statement also stresses Saudi investment pledges and arms purchases. “If we foolishly cancel these contracts, Russia and China would be the enormous beneficiaries,” it adds.

While admitting the murder of Jamal Khashoggi was “terrible”, Trump wrote that “we may never know all of the facts” about his death.

“The United States intends to remain a steadfast partner of Saudi Arabia to ensure the interests of our country, Israel and all other partners in the region.”

Trump later said he would meet Mohammed bin Salman at a G20 meeting in Argentina next week if the crown prince attended.

The essence of America First

Donald Trump is a different kind of president, and nowhere is that more clear than in his foreign policy, exclamation points and all. His release on the death of Jamal Khashoggi is remarkable for many reasons, and not just its blunt language.

The president quickly tries to change the subject to Iran. He dismisses reports that Mohammed bin Salman ordered the murder with a maybe-he-did, maybe-he-didn’t shrug. He cites the economic impact of $ 450 bn in investment and arms sales to the Saudis, although much of that is little more than paper promises.

Perhaps most jarring is his casual observation that the Saudis viewed Khashoggi – a permanent US resident – as an “enemy of the state” with ties to the Muslim Brotherhood.

Trump has distilled his “America First” worldview down to its very essence. Morality and global leadership take a back seat to perceived US economic and military security.

How will the statement play out internationally?

What the take-away will be in the Middle East and beyond is a serious issue, says BBC diplomatic correspondent Jonathan Marcus.

US policy in the region is so closely aligned with that of two key individuals – Mohammed bin Salman in Saudi Arabia and PM Benjamin Netanyahu in Israel – that it is increasingly hard to see how the US can play a role as an independent arbiter, our correspondent says.

Trump’s narrow, interests-based approach will further dismay Washington’s allies in the West, he argues, reinforcing those in Moscow and Beijing who are already applying a “Russia First” and a “China First” approach in international affairs.

February 1, 2019 byRandev No Comments
Japanese police are investigating how a substance thought to be uranium was offered in an online auction.