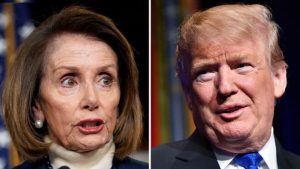 US President Donald Trump says he will not deliver his annual State of the Union speech until after the government shutdown is over.

Trump initially said the speech should be “on time, on schedule, and very importantly, on location.”

But in a tweet overnight he conceded he could not deliver on his pledge.

He acknowledged Pelosi’s refusal to allow Congress to host the State of the Union address until the shutdown – now in its 34th day – had been resolved.

“This is her prerogative,” he said.

Pelosi responded with her own tweet saying she hoped Trump would back a bill passed by the House of Representatives to fund the agencies affected by the shutdown.

“Please accept this proposal so we can re-open government, repay our federal workers and then negotiate our differences,” she said.

Democrats have argued that with so many federal employees furloughed – temporarily laid off – or working without pay, the high-profile State of the Union address, which involves both chambers of Congress and the president, would not be logistically feasible.

But Trump has denied that there were any security concerns posed by the ongoing partial shutdown.

He also rejected suggestions that he could deliver the speech from the White House or another location. (BBC)

October 3, 2019 byTSM Web Desk No Comments
North Korea has confirmed it test-fired a new type of a ballistic missile, a significant escalation from the short-range tests it has conducted since May.