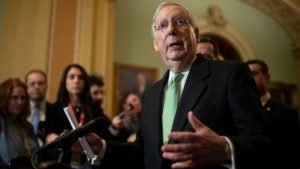 Republican Senator Mitch McConnell says he has not ruled out allowing witnesses to testify in the Senate impeachment trial of President Trump.

Congressional lawmakers are wrangling over Senate trial rules, with Democrats demanding witnesses be called so what they term a fair trial can take place.

Trump was formally impeached by the House last week for abuse of power and obstruction of Congress.

The Senate trial is expected to begin next month, after the holiday break.

The president is accused of pressuring the Ukrainian president to start an investigation into his political rival, Democratic presidential front runner, Joe Biden.

Trump is accused of doing this by withholding military aid and making a White House visit contingent on co-operation.

Democrats have so far refused to handover the articles of impeachment voted through in the House – the charges – to the Senate.

They want assurances from McConnell that their chosen witnesses – at least four current and former White House aides with knowledge of the Ukraine affair – will be allowed to testify.BBC

December 20, 2019 byTSM Web Desk No Comments
MPs will vote on Friday on whether to back the prime minister's plan for the UK to leave the EU on 31 January.

China orders closure of US consulate in Chengdu

July 24, 2020 byTSM Web Desk No Comments
China has ordered the United States to close its consulate in the southwestern city of Chengdu, retaliating against Washington's move earlier this week to shut down the Chinese consulate in the city o