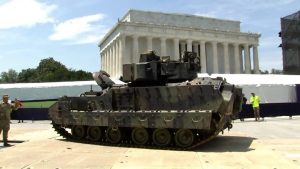 The US military has told Washington DC residents not to panic if they see tanks on the streets for President Donald Trump’s Independence Day parade.

At least two Bradley armoured carriers and two M1A1 Abrams tanks will be moved to the heart of the US capital for the president’s “Salute to America”.

The National Park Service will reportedly divert nearly $2.5m (£2m) to cover the cost of the event.

Trump tweeted his 4 July celebration will be “the show of a lifetime”.

As well as tanks, Trump’s 4 July celebration will feature a military jet flyover, an extended fireworks show and speech by the president at the Lincoln Memorial.

As the armoured vehicles were transported from a railyard in south-eastern Washington DC on Tuesday evening, military officials advised residents not to be alarmed.

Army Col Sunset Belinsky told a local CBS News affiliate that residents of the capital city “will see the vehicles move through their neighbourhoods, but should not panic”.

Col Belinsky did not disclose where the tanks would be displayed on the National Mall in the city centre.

“The Pentagon & our great Military Leaders are thrilled to be doing this,” Trump said in a tweet on Tuesday. “Incredible Flyovers & biggest ever Fireworks!”

But the weather forecast is threatening to rain on Trump’s parade. Afternoon and evening thunderstorms are predicted for Thursday.

The event will be open to the public free of charge, apart from a ticketed area for VIPs in front of the Lincoln Memorial.

Trump will be joined on Thursday by a Pentagon delegation led by the highest-ranking US military officer, Chairman of the Joint Chiefs of Staff General Joseph Dunford.

But the service chiefs of the Army, Navy, Air Force and Marine Corps will not attend.

The Defence Department said in a statement it had received 5,000 tickets from the White House.

Both the Republican National Committee and Trump’s campaign confirmed to US media they had also received passes to hand out.

Trump’s re-election campaign sent out an email this week encouraging supporters to attend the event.

But the Democratic National Committee has been given no tickets for the event. BBC