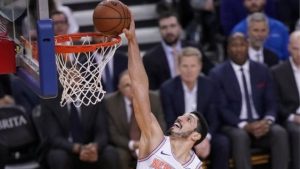 They reportedly accuse Mr Kanter, a 26-year-old centre at the NBA club, of having links with armed groups said to be behind the 2016 failed coup.

The athlete, who describes Turkish President Recep Tayyip Erdogan as a “dictator”, denies the allegations.

His Turkish passport was cancelled in 2017. He holds a US green card.

Earlier this month, Mr Kanter said he would not travel to London for his club’s NBA game on 17 January because of fears over Turkish spies.

“There’s a chance that I can get killed out there,” he said.

In a Facebook post on Wednesday, Mr Kanter wrote that the “Turkish government cannot present any single piece of evidence of my wrongdoing”.

“I don’t even have a parking ticket in the US. I have always been a law-abiding resident,” he added.

Mr Kanter’s US green card allows him to live and work in America on a permanent basis.

An arrest warrant was issued for his father, Mehmet, in June 2018 after the university professor was accused of contacting members of a banned organisation.

More than 50,000 people have been imprisoned across Turkey in a massive crackdown by the authorities, following the failed coup.